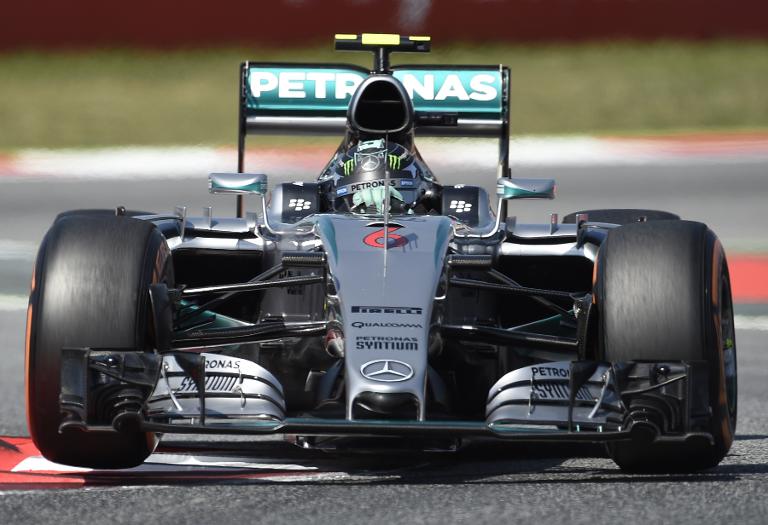 Nico Rosberg ended Mercedes team-mate Lewis Hamilton’s qualifying stranglehold on Saturday when he secured his first pole position of the season in a tense and closely-fought qualifying session for Sunday’s Spanish Grand Prix.

The 29-year-old German produced a fastest lap in one minute and 24.681 seconds in the final Q3 segment of the action to outpace the defending world champion by three-tenths of a second on a hot afternoon at the Circuit de Catalunya, where Hamilton won from pole last year.

His lap was quicker than Hamilton’s 2014 pole time and ended the 30-year-old Briton’s run of four straight poles this year. Rosberg now has to convert that advantage into a first win since last year’s Brazilian Grand Prix to reduce Hamilton’s 27-point lead in the title race.

Rosberg, who has won once in 13 races since his home German Grand Prix victory last year, said he had enjoyed “a good day at the office” to end Hamilton’s run and prevent him enjoying a fifth straight pole success.

“Strategy is important,” he said. “It’s a big advantage to have a new set of used tyres for the race. Overtaking is more difficult around here, so starting in front is a big advantage.”

Eight of the last 10 Spanish races at Montmelo have been won from pole.

“Of course I needed it sooner rather than later,” added Rosberg. “It is one step in the right direction to winning the race. It was a good day in the office.”

Hamilton was subdued and conceded that he had been below his best.

“I did not have the pace today and Nico did a great job,” he said. “I didn’t have the balance where I liked it, but tomorrow there’s still a lot to play for. I didn’t think I was on the back foot, I just didn’t have pace the and I didn’t do a great job.”

It was the first time that Toro Rosso had qualified a car in the top 10 at the Spanish event.

Vettel, meanwhile, said he was not disappointed by his, or Ferrari’s, failure to claim a front-row start.

“I think disappointed is the wrong word. I think it is great for Ferrari to keep confirming how close we are,” he said.

Another Finn, Kimi Raikkonen, was down in seventh for Ferrari ahead of Russian Daniil Kvyat of Red Bull, Brazilian Felipe Massa in the second Williams and Australian Daniel Ricciardo in the second Red Bull.

It was the 16th pole of Rosberg’s career and his first since claiming the prime grid spot for last year’s season-ending Abu Dhabi Grand Prix.

Hamilton qualified on the front row for the 13th successive race stretching back to last year’s Hungarian Grand Prix.

The air temperature at the Circuit de Catalunya was 25 degrees and the track was 45, enough heat to make tyre-wear an issue if repeated in Sunday’s race.

Hamilton topped the times in the opening Q1 part of the session ahead of Rosberg and Raikkonen.

That session saw the elimination of German Nico Hulkenberg of Force India in 17th place behind Swede Marcus Ericsson of Sauber, but one ahead of Mexican Sergio Perez in the second Sauber.

Out went Frenchman Romain Grosjean and his Lotus team-mate Pastor Maldonado, in 11th and 12th, followed by the two McLaren Hondas of home hero Fernando Alonso and Briton Jenson Button.