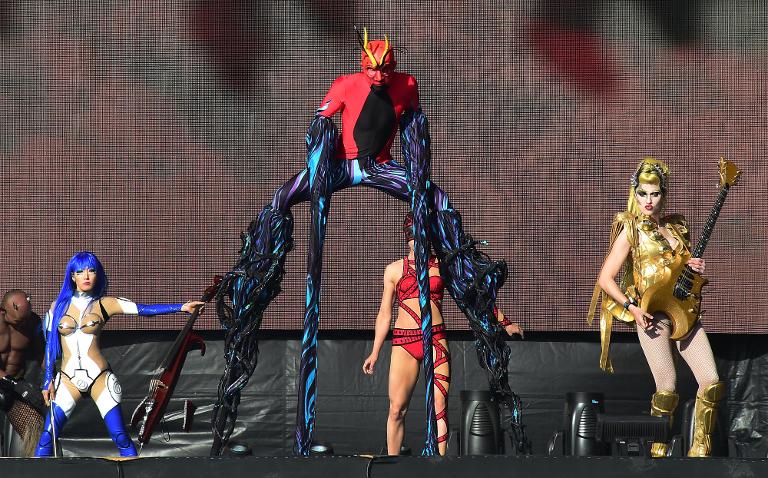 Rock in Rio, the giant festival from Brazil, kicked off a first Las Vegas edition Friday as it bet big on the booming US appetite for live music.

With an investment of $75 million, the festival inaugurated a specially built 40-acre (16-hectare) “City of Rock” on the Las Vegas Strip.

Rock in Rio USA will run for a total of four days over back-to-back weekends. The first weekend is geared toward hard rock, with metal legends Metallica playing Saturday in the band’s first show in months.

The second weekend will focus on pop acts and culminate with Taylor Swift, by far the top-selling US musician of 2014, days before the formal start of her world tour.

The line-up shows that Rock in Rio USA is marketing itself toward what is, paradoxically, an untapped audience among festivals — fans of major mainstream artists.

The three most prominent US festivals — Coachella in California, Bonnaroo in Tennessee, and Lollapalooza in Chicago — all have roots in the 1990s alternative scene and, while booking big acts, pride themselves on showcasing up-and-coming artists.

Summer music festivals, which have a longer history in Europe and especially Britain, have boomed in the past 15 years in the United States, led by fans from the millennial generation, with a slew of new events sprouting up gearing to every niche and region.

Rock in Rio has its roots in the fall of Brazil’s military dictatorship in 1985 when a total of 1.38 million people came out for 10 days of music that included Queen, Rod Stewart, AC/DC and Yes.

A sixth edition in Rio de Janeiro is due in September and the festival has already expanded to Lisbon and Madrid.

“We hope to become a global event in multiple continents and countries, held at regular time intervals, like the Olympics or the World Cup,” Rock in Rio’s founder Roberto Medina said in a statement.

“Only we would install one fundamental difference: instead of promoting athletes and competition among countries, each new edition would be an opportunity to unite all people, together, under the flag of art.”

Rock in Rio hopes to throw the US festival every two years and use the City of Rock in Vegas for other events.

And in a touch of Las Vegas, the Sin City of gambling, booze and elopements, Rock in Rio USA offers a wedding chapel.

In one innovative feature, Rock in Rio USA has gone entirely cashless.

Fans will buy concessions by scanning their wristbands, through which they will add value via a credit card.

And unlike at many major festivals, where fans make tough choices when acts are performing simultaneously in different places, Rock in Rio USA has a tighter lineup with just two main stages whose performances will not overlap.

The exception is a smaller stage — designed like a futuristic spider — for electronic dance music, a genre whose growth on the festival circuit has been especially strong.

Rock in Rio USA’s first day opened Friday with a specially choreographed performance by Cirque du Soleil and was headlined by No Doubt.

Other acts on the line-up during the festival include Bruno Mars, Ed Sheeran and Linkin Park.

British soul sensation Sam Smith was scheduled to perform but canceled as he undergoes surgery for a vocal cord injury.