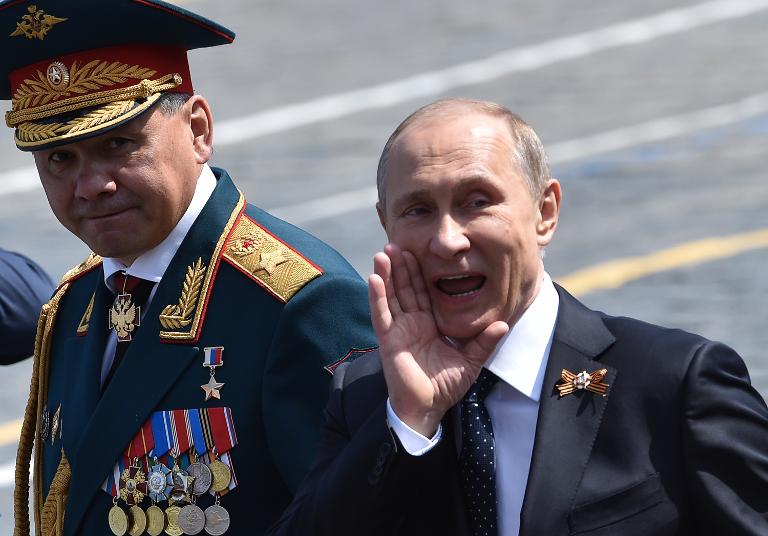 Russian President Vladimir Putin shrugged off a boycott by Western leaders at a huge military parade Saturday to mark the 70th anniversary of victory in WWII before joining mammoth crowds for a commemorative march.

In what is seen as punishment for Kremlin meddling in Ukraine, Western countries led by Russia’s World War II allies snubbed the May 9 festivities, leaving Putin to mark the day in the company of the leaders of China, Cuba and other Moscow-friendly figures.

Addressing thousands of foreign guests and veterans, Putin chose to ignore the boycott, thanking Britain, France and the US for their “contribution” to the defeat of Germany.

“Our fathers and grandfathers went through unbearable suffering, deprivation and losses,” Putin said, feting the country’s veterans and the “grandeur of Victory over Nazism”.

“We are grateful to the people of Great Britain, France and the United States for their contribution to victory,” he added, also thanking those who fought against the Nazis in other countries including Germany.

In an apparent dig at the United States, Putin also criticised attempts to establish a “unipolar” world order and stressed the need to develop a “system of equal security for all states”, but he conspicuously shunned more aggressive rhetoric and made no mention of the Ukraine crisis.

Speaking at a reception later, Putin said international relations should be guided by the WWII-era “spirit of allied partnership”.

More than 16,000 soldiers including troops from China, India, Mongolia, Serbia and several ex-Soviet states marched past the leaders.

In a finely choreographed spectacle, troops including soldiers sporting Soviet-era uniforms and rifles and a cavalry regiment marched across Red Square’s famed cobbles as Putin, seated next to China’s Xi Jinping, looked on.

Cutting-edge military equipment including the next-generation Armata T-14 tank and nuclear missile systems rumbled through the square along with the famed war-era T-34 tank, in one of the biggest Victory Day celebrations in decades.

The parade also saw over a hundred military aircraft — including long-range nuclear bombers — swoop over Moscow in a spectacular fly-by.

In a gesture highlighting Russia’s new-found religious fervour, Defence Minister Sergei Shoigu crossed himself at the start of the parade, and at noon church bells tolled for fifteen minutes.

Raul Castro of Cuba, Nicolas Maduro of Venezuela, Robert Mugabe of Zimbabwe and Jacob Zuma of South Africa were also in attendance.

US actor Steven Seagal also watched the parade as did a leather-clad Alexander Zaldostanov, leader of a Kremlin-backed biker gang.

The Soviet Union lost an estimated 27 million soldiers and civilians in WWII — more than any other country — and the Red Army’s triumph remains an enormous source of national pride.

But the Kremlin parade was overshadowed by the Ukraine crisis, with the West slapping sanctions on Moscow over Russia’s seizure of Crimea and support for separatists in eastern Ukraine.

United States President Barack Obama has snubbed the festivities, as have the leaders of Russia’s other key WWII allies Britain and France.

German Chancellor Angela Merkel ducked out of attending the parade but was to fly to Moscow on Sunday to lay a wreath at the grave of the Unknown Soldier.

President Petro Poroshenko of war-torn Ukraine has branded Russia’s show of military might a “parade of cynicism”.

Several hours after the main parade, Putin unexpectedly joined the head of a vast commemorative march — that police said later swelled to some 500,000 people — clutching a portrait of his father, who fought in the war.

“I think that my father, just like millions of simple soldiers – and he was a plain soldier — had every right to walk through this square,” Putin said, as he briefly led the vast crowd in the Kremlin-backed event dubbed the “Immortal Regiment.”

Lyudmila Yurkova, 72, a university lecturer, said the world owed a debt to Russia as she marched as part of the huge events where most participants carried portraits of relatives.

“Europe is forgetting that the USSR won the war,” she told AFP.

Over 70 percent of Russians say a close family member was killed or went missing during the war.

Victory Day was celebrated across Russia, with authorities staging parades involving thousands of soldiers, naval vessels and even nuclear submarines.

In recent years, victory in what Russians call the Great Patriotic War has been raised to cult status, with critics accusing Putin of seeking to co-opt the country’s history to boost his personal power.

The Kremlin has also used WWII narratives to rally support for its current political agenda, painting the pro-Western Ukrainian government as Nazi sympathisers.