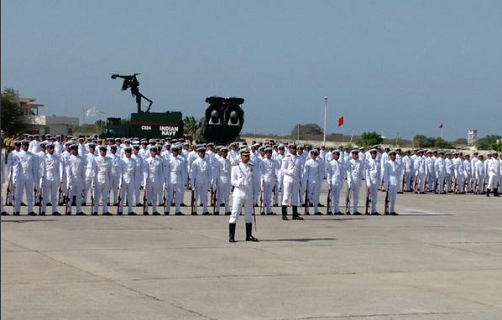 New Delhi: INS Sardar Patel, the latest naval base of the Indian Navy, was commissioned in Porbandar, Gujarat on Saturday in the presence of Gujarat Chief Minister Anandiben Patel and Admiral RK Dowan.

Speaking on the occasion, Admiral Dhowan said that INS Sardar Patel will provide the required logistic, administrative and operational support.

â€œShips, submarine and aircraft have been deployed in Gujarat region,â€ he said.

He added that the Indian Navy aims to be self-reliant and indigenious in the future.

â€œIts our endeavor to progressively increase our indigenous content so that future warships and submarines are 100% ‘Made in India’, he further said.

The Gujarat CM extended best wishes to the commanding officer of INS Sardar Patel and team and tweeted, â€œSafety of Gujâ€™s 1600 km coastline is vital for state as well as nation.I thank Navy for safeguarding our coastal borders unceasingly!â€.

In view of the enhanced operational tempo along the coast of Gujarat due to the growing maritime security challenges, there is requirement of gradually enhancing infrastructure, Navy sources said.

“The commissioning of INS Sardar Patel on May 9 is one of the steps being taken by the Navy in this direction,” they said, adding it will enable Navy to qualitatively augment its infrastructure and organisational effectiveness in Gujarat.

This would also improve the logistic support being provided to the Indian Navy units deployed in the Northern Arabian Sea, including along the International Maritime Boundary Line with Pakistan.

Gujarat has the longest coastline of 880 NM, besides sharing 532 km of land border with Pakistan. “The maritime infrastructure has grown over the decades and many ports have come up along the coastline, which handles 300 million tons of cargo annually, constituting approx 30% of the total cargo handled in the ports of India,” a naval official said.

Navy says there are 12 single point moorings (SPMs) in the Gulf of Kutch, through which about 120 million tons of crude oil is supplied to various refineries on the coast and in the hinterland, constituting 71 per cent of the oil import into the country.