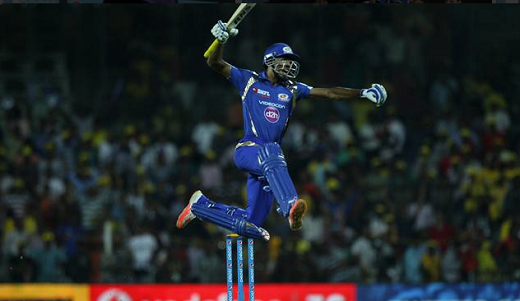 Chennai:Â Mumbai Indians defeated Chennai Super Kings by six wickets in a breathtaking finish to record their fifth successive win of the Indian Premier League in Chennai on Friday.Â

Needing 30 runs off the last 12 balls, Hardik Pandya (21 not out of 8 balls) and Ambati Rayudu (34 off 19) smashed left-arm spinner Pawan Negi for 25 runs in the penultimate over to tilt the high-pressure game in Mumbai’s favour.Â

Mumbai took two balls to knock off the five runs needed in the final over, ending at 159/4. Super Kings had recovered to post 158 for five in 20 overs.Â

Pandya was the star of the night as he backed his effort on the field by hitting three sixes in the 19th over, proving to be the difference in the end.Â

Super Kings remained at top in the points table despite their first defeat at home this season while Mumbai added to their remarkable turnaround with a fifth win in as many games. They are now fourth in the standings with six wins and five losses.Â

The away team made a flying start in the chase, racing to 61 for no loss in six overs.Â

Parthiv Patel (45) was aggressive from the outset, getting his first four with a exquisite punch on a length ball from medium pacer Mohit Sharma.Â

Simmons soon joined in punishing the bowlers, especially in-form speedster Ashish Nehra, smashing the experienced Indian for a six and couple of fours.Â

Having already off to their best start of the season, Mumbai were cruising at 84 for no loss in 10 overs.Â

The momentum shifted dramatically in the next over when R Ashwin removed the openers in space of four balls, sending the partisan crowd into a frenzy.Â

And soon it became 86 for three as Dwayne Bravo had his West Indies teammate run out Kieron Pollard with a spectacular direct hit. Super Kings were right back into the game out of nowhere.Â

Mumbai, needing 58 runs off the last 30 balls, were now relying heavily on skipper Rohit Sharma and Rayudu. The seasoned pair took the team closer the to target by hammering Nehra for 17 runs in the 17th over, their team still needing 34 off 18 balls.Â

While Rohit got out, Rayudu led his team to a thrilling win.