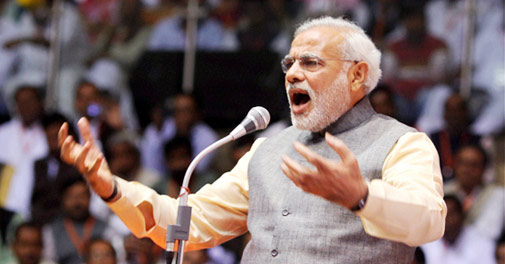 New Delhi: Prime Minister Narendra Modi will visit the Maoist-affected Dantewada district of Chhattisgarh on Saturday.Â This will be Modi’s first visit to the region after becoming the Prime Minister last year.

Modi is scheduled to inaugurate two projects there worth a total ofÂ Rs.24,000 crore – a steel plant in Dantewada’s Dilmili village and the second phase of a 140 km railway line from Raoghat to Jagdalpur.

He is scheduled to visit the education city and Livelihood College in Dantewada.

Prime Minister Modi, who would be addressing a public meeting, will also interact with the children and youth from the tribal communities.

Security has been stepped up in the state ahead of Prime Minister Modi’s visit. A multi-layered security cover has been put in place in Bastar region.

More than 10,000 personnel of the CRPF, Special Task Force (STF), state police and the anti-naxalite wing have been deployed in view of the Prime Minister’s visit.

Unmanned aerial vehicles have also been deployed for aerial surveillance.

Meanwhile, the Maoists have called for a shutdown on Saturday.Â On Friday, they chopped a tree and used it to block a road, put up posters registering their protest, and hung effigies of Modi and Chief Minister Raman Singh.