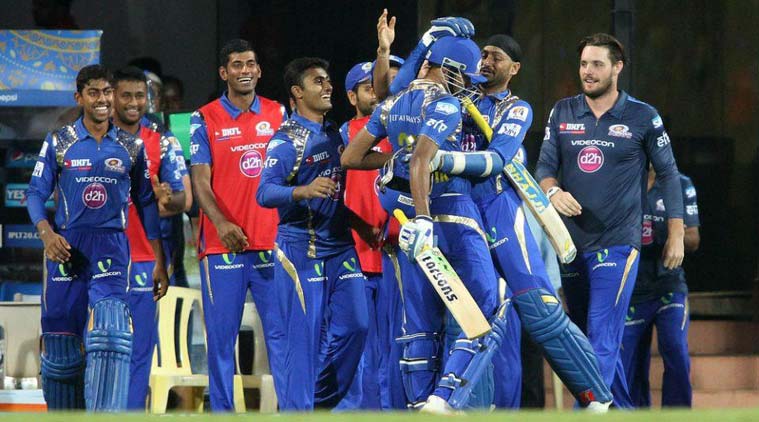 Mumbai Indians defeated ChennaiÂ Super Kings by six wickets in a breathtaking finish to recordÂ their fifth successive win of the Indian Premier League. Needing 30 runs off the last 12 balls, Hardik Pandya (21Â not out of 8 balls) and Ambati Rayudu (34 off 19) smashedÂ left-arm spinner Pawan Negi for 25 runs in the penultimateÂ over to tilt the high-pressure game in Mumbaiâ€™s favour. Mumbai took two balls to knock off the five runs neededÂ in the final over, ending at 159/4.

Super Kings had recoveredÂ to post 158 for five in 20 overs. Pandya was the star of the night as he backed his effortÂ on the field by hitting three sixes in the 19th over, provingÂ to be the difference in the end. Super Kings remained at top in the points table despiteÂ their first defeat at home this season while Mumbai added toÂ their remarkable turnaround with a fifth win in as many games. They are now fourth in the standings with six wins and fiveÂ losses.

The away team made a flying start in the chase, racingÂ to 61 for no loss in six overs. Parthiv Patel (45) was aggressive from the outset,Â getting his first four with a exquisite punch on a length ballÂ from medium pacer Mohit Sharma. Simmons soon joined in punishing the bowlers, especiallyÂ in-form speedster Ashish Nehra, smashing the experiencedÂ Indian for a six and couple of fours.

Mumbai were cruising at 84 for no loss in 10 overs. The momentum shifted dramatically in the next over whenÂ R Ashwin removed the openers in space of four balls, sendingÂ the partisan crowd into a frenzy. And soon it became 86 for three as Dwayne Bravo had hisÂ West Indies teammate run out Kieron Pollard with a spectacularÂ direct hit. Super Kings were right back into the game out ofÂ nowhere.

Mumbai, needing 58 runs off the last 30 balls, were nowÂ relying heavily on skipper Rohit Sharma and Rayudu. TheÂ seasoned pair took the team closer the to target by hammeringÂ Nehra for 17 runs in the 17th over, their team still needingÂ 34 off 18 balls. While Rohit got out, Rayudu led his team to a thrillingÂ win.

Earlier, M S Dhoni (39 not out off 32 balls) and Negi (36Â off 17) smashed 55 off the last five overs to push their teamÂ to a fighting total after it struggled for runs in major partÂ of the innings.

The home team had a rather quiet start by theÂ standards of their explosive openers as they reached 44 forÂ one in the first six overs. Brendon McCullum (23 off 11) was given a life early onÂ with Harbhajan Singh dropping a simple catch at backwardÂ square leg off left-arm spinner J Suchith. It seemed the New Zealander would make Mumbai pay forÂ their mistake when he hit three successive fours off mediumÂ pacer Vinay Kumar. However, much to the relief of theÂ visitors, the dangerous batsman was caught at deep mid-wicketÂ the next ball after he mistimed another hit off the KarnatakaÂ bowler.

His opening partner Dwayne Smith (27 off 34) too wasÂ holed out at deep-midwicket, as well as Suresh Raina (10), whoÂ was sent back with a brilliant running catch by Hardik Pandya,Â leaving Super Kings at 67/3 in 10 overs. Pandya was theÂ catcher in all three dismissals. Faf du Plessis (17) and Dhoni then gathered 39 runs forÂ the fourth wicket but just when they looked ready for theÂ death overs onslaught, the South African fell to a leapingÂ catch by Simmons off pacer Mitchell McClenaghan.

Dhoni now had Negi by his side and the Delhi basedÂ cricketer, coming ahead of Ravindra Jadeja, did not disappointÂ his skipper, smashing four fours and a six in quick time. The captain too got into the groove late into hisÂ innings, collecting two sixes and as many boundaries to theÂ delight of his fans at Chepauk.Â