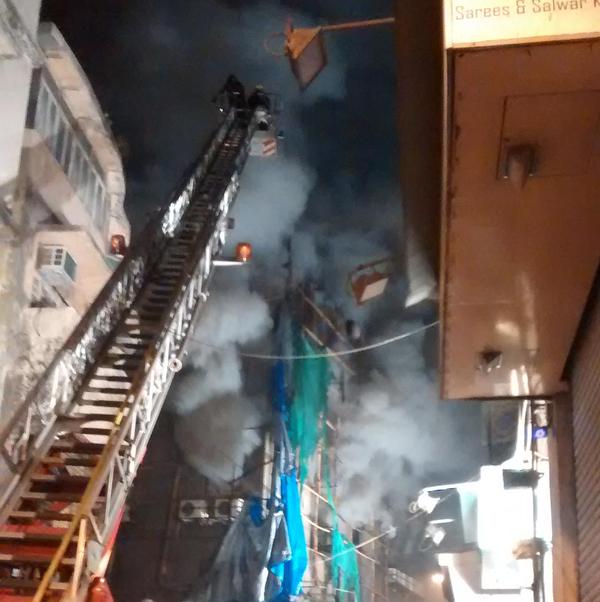 The building, ‘Gokul Nivas’, is situated in Kalba Devi, and houses some residential apartments on the fourth floor, while on lower floors there are cloth godowns and shops.Â

A portion of the building — which was undergoing repairs– is reported to have tilted as the wooden beams and columns have been gutted, a fire brigade official said.Â

“There is a possibility of casualties but at this moment nothing can be confirmed as our team is busy dousing the flames,” said an official, adding three personnel of fire brigade sustained minor injuries while rescuing the trapped people from the building. A couple of residents too were injured.Â

They were admitted to Masina Hospital.Â

“We were informed about the fire at 4.20 pm and our personnel reached the spot in ten miniutes despite traffic snarls,” said the official.Â

At eight pm, the fire fighters were still trying to bring the fire under control, he said, adding that 17 fire engines and 10 tankers had been rushed to the spot.Â

Jagdish Purohit, manager of the adjacent Adarsh Hotel, said “fire brigade personnel did a good job…They put their lives at stake and saved a few residents from the backside of the building.