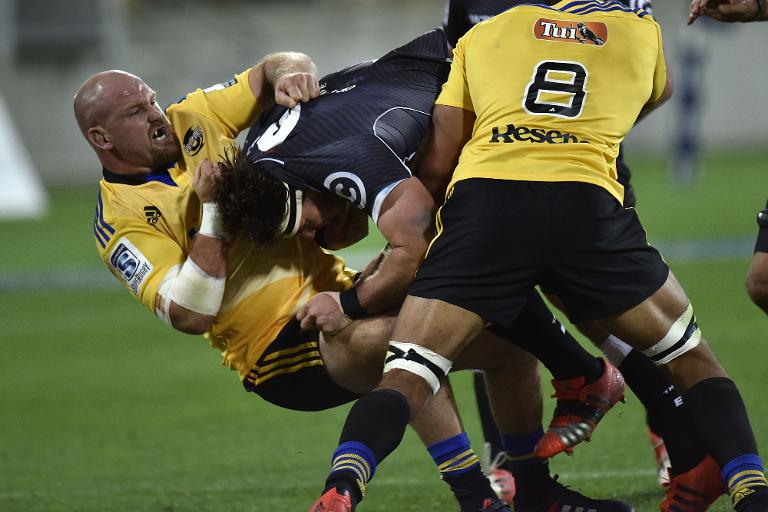 A late rally by the table-topping Wellington Hurricanes kept them on track for the Super 15 play-offs Saturday with a 32-24 victory over a spirited Coastal Sharks in Wellington.

With Britain’s Prince Harry an interested spectator on the first day of a week-long New Zealand tour, the Sharks led three times in the match only to be denied even a bonus point by the Hurricanes last ditch flourish.

The competition leaders scored 11 points in the closing minutes to turn a 21-24 deficit into a four-try bonus point victory.

However, Harry, a keen rugby fan and honorary president of England Rugby 2015, the organising committee for this year’s World Cup, gained little insight into the pre-Cup form of many Hurricanes All Blacks.

Julian Savea and TJ Perenara were rested while Beauden Barrett and Dane Coles are injured, but despite being down on firepower, the ‘Canes ultimately proved more adept than the Sharks at playing for the full 80 minutes.

They chalked up their 10th win from 11 outings while the Sharks tasted defeat for the fifth successive game and eighth time this year.

The Hurricanes led 14-10 at half-time, slipped behind twice in the second half, but captain Conrad Smith said he never lost faith in the young players in the side coming right when it mattered.

“They all stood up so it’s very encouraging, I was impressed with their composure,” he said.

“We were always calm when we were behind our posts. We knew if we got our chance we had to make the most of it and that’s the way it worked out.”

The Sharks started strongly, with Bismarck du Plessis crashing over from a sixth minute lineout steal to ignite a frantic opening quarter.

Cory Jane levelled the scores with a try wide out which James Marshall, promoted to starting fly-half in place of Barrett, converted.

A penalty to Francois Steyn, who had a big impact on his return from a four-game suspension, and a try to Smith, who brushed aside JP Pietersen completed the first-half scoring inside the opening 19 minutes.

The Sharks hit the front again from turnover ball after the resumption with Lionel Cronje drawing in the defence to send Sibusiso Sithole over to start a see-sawing second spell in which the lead changed four times.

Reggie Goodes ended a series of forward drives to regain the lead for the Hurricanes before Odwa Ndungane scored for the Sharks.

With the tries all converted, a boilover was on the cards as the Sharks led 24-21 with eight minutes remaining.

But in the countdown to the final hooter Jeremy Thrush scored for the Hurricanes and Marshall landed two penalties to secure the win.