Home Science & Tech Hate folding clothes? This robot will do it for you 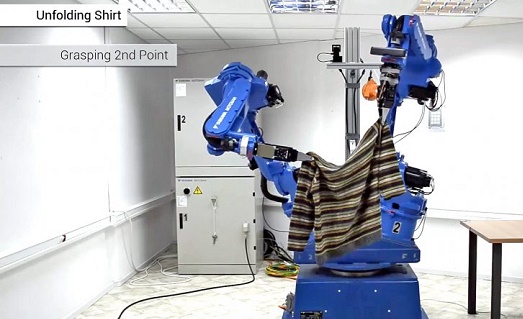 London: Scientists have created a new robot, which may be a savior to all those people who hate folding their clothes.

Built in a laboratory atÂ Glasgow UniversityÂ , the machine took 3 years of work by engineers from Scotland, the Czech Republic, Italy and Greece to come to existence, and is capable of establishing the type of fabric with help of digital cameras as its “eyes” and sensitive grippers as its “hands”.

The 8ft-high robot, nicknamed Dextrous Blue, has pressure sensors into its grippers, which makes it “feel” the texture of the clothing, and rubs the material, with small microphones to pick up the sound given off.

The project – officially titled CloPeMa, orÂ Clothes Perception and Manipulation, aims to create the robots to carry out household chores.

However, the since theÂ foldingÂ task proved difficult for the robot, the scientists hope to replace therobot’s cake-cutter like appendages with prosthetic hands, for 100 per cent accuracy.

Dr Paul Siebert, the computer scientist who led the project, said British textile could use similar machines to make clothes in their factories, rather than sending them around the world for the work to be completed by low-paid labourers in future.