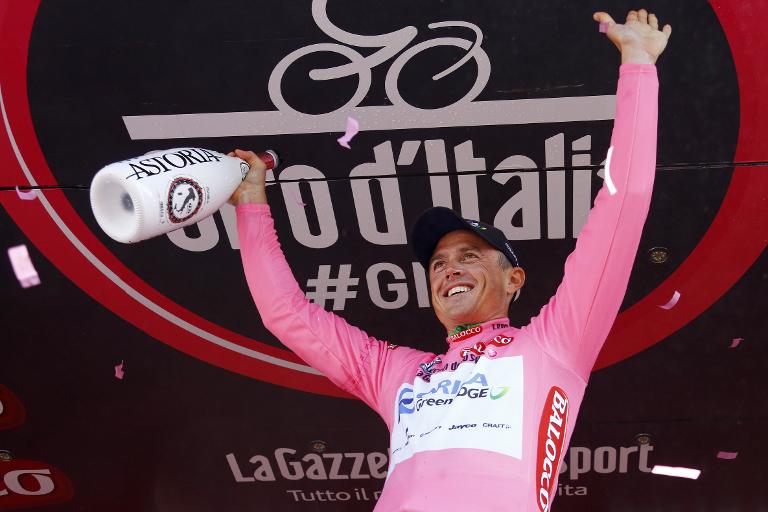 Australian Simon Gerrans put his injury woes behind him as he pulled on the leader’s pink jersey Saturday when his Orica outfit won the first stage team time-trial at the Giro d’Italia.

The 34-year-old from Melbourne missed this season’s classics after breaking his collarbone and arm in separate falls.

But he crossed the line first ahead of fellow Australians Michael Matthews and Michael Hepburn as their Orica team won the 17.6km time-trial on the Italian Riviera.

“I’ve had a difficult start to the season,” admitted Gerrans, one of the only riders competing to have won stages of the three Grand Tours — Italy, France and Spain — but who had never worn the pink jersey before.

“I’ve had to rebuild from zero after my fall.

“I missed my first two objectives of the season, the Australian championships and the Tour Down Under, and then the Ardennes classics.

“I hope that my luck has changed.”

Gerrans, who wore the Tour de France yellow jersey for two days in 2013, also won a stage in his only previous appearance in the Italian race in 2009.

“We’re very close to each other in the team,” said Gerrans, who achieved one of his biggest wins in Italy at the 2012 Milan-San Remo classic.

“Our advantage was to have very strong time-trial specialists in the team, capable of giving 100 percent.

“This jersey should be divided in nine. The objective now is to hold the pink jersey in the team,” added Gerrans, who admitted his chances of overall victory were slim.

“In the sprints Michael Matthews is our best option. Then in the tough stages we’ll see with Esteban Chaves,” he explained.

“Why not me? I’m among the best in the world in the classics but in the stage races I can target at best a place in the top 20.

“In the the Giro I’ll see day by day depending on how I feel.”

Former champion Alberto Contador got off to a promising start after the Spaniard’s Tinkoff team finished second.

Contador, 32, achieved the best result of the race favourites taking six seconds on Italy’s Fabio Aru, whose Astana team were third, with Colombian Rigoberto Uran of the Etixx at 12 seconds and Australian Richie Porte of Sky at 20sec.

“The weather is beautiful, the public very warm and I have a good feeling,” said Contador, the 2008 winner who is bidding for a seventh Grand Tour victory.

“It’s a perfect start to the Giro, perfect even if we would have preferred to win when we were so close to victory. But we have to think about the overall standings. And in this sense it’s a good result.”

Orica clocked 19min 26sec to put themselves in the same position as last year when they won the first stage in Belfast with five riders from their current team.

The Tinkoff team were at 07sec and Astana 13sec off the pace.

“It was planned that Gerrans cross the line first,” said Matthews, who finds himself in the same position as last year before seizing the pink jersey which he held for for six days.

Sunday’s second stage over 177km between Albenga and Genoa should favour the sprinters.