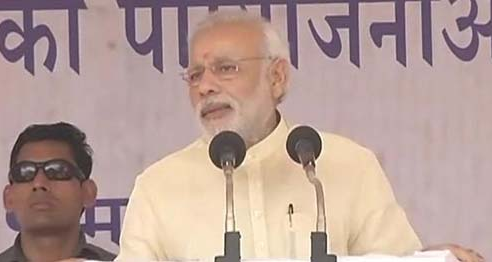 Dantewada: Speaking about the Naxal problem in Chhattisgarh,Â Prime MinisterÂ Narendra ModiÂ on Saturday saidÂ there is no future in violence.Â

“There is no future in violence. If there is a future, it is in peace.Chhattisgarh has the power to change the future of India,”Â the prime minister said while addressing the locals ofÂ Dantewada,Â considered a hub ofÂ NaxalÂ activities.Â

Modi affirmed his government’s commitment to fight the Naxal menace and said that it is a plough on the shoulders that can bring development and not guns.

On Naxalism, Modi said,”The macabre drama of death will end.”

He assured employment to the locals saying, “Jobs for the youth are at the core of our policies.”Â “Fruits of development must reach the poorest of the poor,” he further said.Â

Talking about his government’s ‘Jan Dhan Yojna’, Prime Minister Modi said that this is an initiative to empower each individual and bring him at par with the country’s mainstream.

“The fruits of development must reach the poorest of the poor. Jobs for the youth are at the core of our policies,” he said.

The Prime Minister also laid emphasis on skill development, saying it is critical to ensure employment.

“Even developed and happy nations of the world are laying emphasis on skill development,” he said.

“This is probably the first time in Bastar’s history that projects worth Rs. 24,000 crore have been signed in just one hour. I can imagine what this will do for the development of Bastar,” he said.

Dantewada is in the tribalÂ BastarÂ region and is rich in mineral resources, especially iron ore. The area has witnessed a string ofÂ naxalÂ attacks in the past, with the worst being the 2010 Maoist assault that left 76Â CRPFÂ personnel dead.