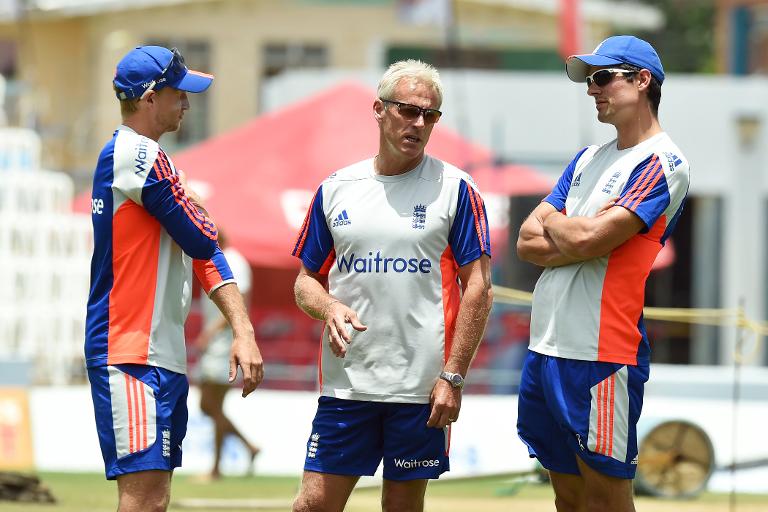 England players rallied to the support of Peter Moores as reports emerged that the under-fire coach is on the verge of being sacked for the second time.

James Taylor, who skippered England in Friday’s washed-out one-day international against Ireland in Malahide, and Mark Wood, one of five debutants in the team, were not in a position to confirm Mooresâ€™ fate.

But just days before Andrew Strauss is expected to be appointed as the new director of cricket at the England and Wales Cricket Board (ECB) they certainly gave him a ringing recommendation.

â€œHe is really positive, keeps it simple and although Iâ€™ve limited experience of him in the England camp, he has always been helpful and positive and thatâ€™s all I could ask of him,” said Taylor.

â€œToday he has been brilliant as always, good around the dressing room and the guys are firmly behind him.â€

Wood added: â€œHe gave me my chance in the West Indies so Iâ€™m thankful for that. Heâ€™s been brilliant with me and has always been positive.â€

If Strauss does take over and Moores is removed from his post, it will mean the coach’s second spell in charge will have lasted barely a year since he was brought back in 2014 following England’s 5-0 Ashes thrashing in Australia, which led Andy Flower to step down as coach.

Moores’s second spell — he was initially dismissed in 2009 after a falling out with then captain Kevin Pietersen — has so far yielded just one series win, at home to India last year, and included England’s embarrassing exit from the World Cup, where they failed to beat a single Test nation, and a disappointing 1-1 series draw in the West Indies.

Friday’s one-off game was abandoned after just 18 overs due to torrential rain.

But Durham seamer Wood thanked Taylor for giving him the new ball in helpful, overcast conditions and although he admitted he â€œdidnâ€™t bowl that greatâ€ he took the wicket of Ireland captain William Porterfield in his fourth over.

Zafar Ansari did not get a chance to make an impression but David Willey also took a wicket on debut, to a catch by Jason Roy.

Quite how many will be involved in Englandâ€™s next ODI, against New Zealand when the Test match squad will also be available is unknown, but Wood insists he will be ready for the call.

â€œI havenâ€™t played much for month and a bit but Iâ€™d be delighted to be called up and will be ready to play.

“Going to the West Indies was a big positive for me and although I didnâ€™t get a game, the big players, Cook, Anderson and Broad were fantastic with me,â€ he said.

â€œI got a little advice from them all and hopefully Iâ€™ll be a better cricketer and will be trying to put those skills into practice in the next few weeks.â€

Taylor hasnâ€™t given up hope of being involved in the Test squad, adding: â€œThe batsmen didnâ€™t get a chance to perform today but hopefully Iâ€™ll be involved and itâ€™s up to me to keep knocking down the door.â€

The day was, if anything, more frustrating for Ireland and, in particular, their new coach John Bracewell.

The former New Zealand coach had no input in team selection but he learnt little and Ireland have only one more ODI against a Full Member in the pipeline, the other biennial fixture, against Australia in Belfast in August.

Porterfield said: â€œEveryone is aware of the situation we are in and where we want to go, we want to play as many ODIs as possible against the big teams so this was disappointing, especially as we always want to put on a show and win games.â€