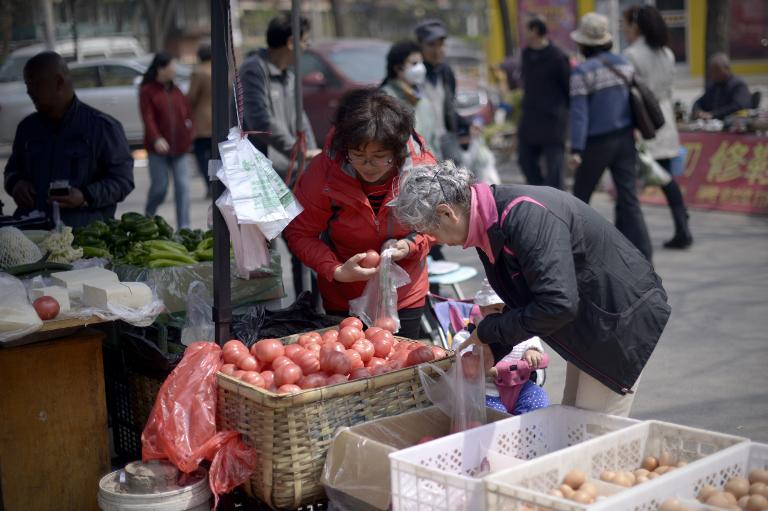 Consumer inflation in China rose to 1.5 percent in April, authorities said Saturday, but came in below market forecasts and analysts called for more action to avoid deflation in the world’s second-largest economy.

The rise in the consumer price index (CPI), a main gauge of inflation, released by the National Bureau of Statistics (NBS) was the highest since December, and a slight increase on March’s 1.4 percent.

But it came in lower than the median prediction of 1.6 percent in a survey of 39 analysts by Bloomberg News.

“April CPI inflation remained subdued,” Japanese financial firm Nomura said in a research note, which added there was no inflationary pressure in the near term.

“CPI inflation at these levels means there is ample room for monetary policy easing.”

Moderate inflation can be a boon to consumption as it encourages consumers to buy before prices go up, while falling prices encourage shoppers to delay purchases and companies to put off investment, both of which can hurt growth.

Concerns about the risk of deflation in China have been on the rise especially after January’s slump in consumer inflation to 0.8 percent, the lowest since November 2009.

Separately, the producer price index (PPI) — a measure of costs for goods at the factory gate and a leading indicator of the trend for CPI — declined for the 38th consecutive month in April, the NBS said.

The 4.6 percent fall was the same as in March. PPI last rose more than three years ago.

It was also lower than market forecasts, with a Bloomberg News poll of 36 economists projecting a 4.5 percent drop.

Analysts called for Beijing to take stronger monetary stimulus measures to address a broad growth slowdown in the Chinese economy.

“As the deflation risk has not yet diminished, we believe that further monetary policy easing is highly needed,” ANZ economists Liu Li-Gang and Zhou Hao said in a reaction, describing the inflation figures as “soft”.

They predicted the central People’s Bank of China (PBoC) will cut interest rates by 25 basis points during the current quarter.

The PBoC has already cut interest rates twice since November and this year has twice reduced the amount of cash banks must keep in reserve, as well as using other measures to inject liquidity into the market.

But the PBoC on Friday ruled out quantitative easing for an economic boost, saying it would use monetary policy to fine-tune the economy, the official Xinhua news agency reported.

Growth slowed further to 7.0 percent in the January-March period, the worst quarterly result in six years and down from 7.3 percent in the final three months of 2014.

Data released this week has already pointed to weakening momentum in the current quarter.

British bank HSBC’s purchasing managers’ index, which tracks activity in China’s factories and workshops, recorded its worst contraction in a year in April as subdued domestic demand continued to weigh on growth, it said on Monday.

Authorities say China needs slower, more sustainable expansion as they attempt to retool the country’s economic model, but have taken steps to loosen monetary policy in a bid to ensure the slowdown does not get out of hand.