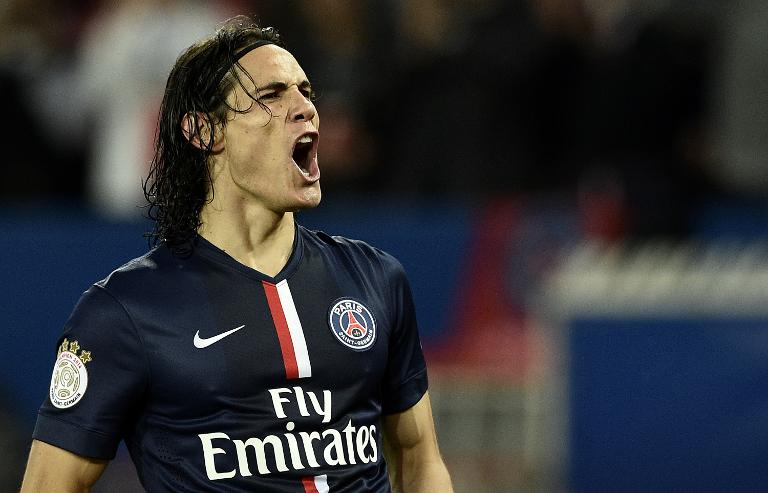 A hat-trick from the in-form Edinson Cavani propelled Paris Saint-Germain to a comprehensive 6-0 win against Guingamp on Friday that allowed them to close in on a third consecutive French title.

Zlatan Ibrahimovic, with a brace, and Maxwell were also on target as PSG made it seven straight Ligue 1 wins and moved six points clear of nearest rivals Lyon before their match at Caen on Saturday.

Even if Lyon win their remaining three matches, Laurent Blanc’s Paris side would require only four more points to retain the title, and they should have little trouble getting the job done on current form.

Far from letting their Champions League quarter-final exit to Barcelona last month have an adverse affect on performances, PSG — with the League Cup in the bag and French Cup final to come — have appeared determined to go on and secure what would be an unprecedented domestic treble.

The form of Cavani and the return from suspension of his strike partner Ibrahimovic have both been key for the capital club, and they now have 58 goals between them in all competitions this season.

Cavani in particular has looked like a different player in the last month and his first hat-trick in French football means he has now scored 10 times in six matches in domestic competition.

“We played very well and continued what we have been doing over the last six or seven matches. I am not looking any further.

“We will appreciate this victory and the fact we are top. There are lots of positives tonight. I am very proud of the players.”

The Uruguayan Cavani set the ball rolling by diverting in a low Serge Aurier cross from the right with less than two minutes on the clock and fans still arriving at the Parc des Princes on a sunny national holiday evening in Paris.

Guingamp beat PSG 1-0 when the sides last met back in December, but with their top-flight survival secured coming into this fixture, their thoughts seemed to have already turned to a well-earned summer holiday.

Claudio Beauvue, whose outstanding season has made him a target for clubs in England and elsewhere, almost caught out Salvatore Sirigu with a swerving free-kick from fully 40 yards, but the visitors offered next to nothing in open play and fell further behind on 18 minutes.

Marco Verratti exchanged passes with Cavani and teed up Ibrahimovic, who took his time before firing into the roof of the net.

Ibrahimovic was then happy to play the role of provider as Paris ran away with the game in the second half, first setting up Cavani for a great finish to make it 3-0 shortly after half-time.

Maxwell then arrived at the back post to head in after a cheeky chip to the back post by Ibrahimovic, and Cavani’s hat-trick goal came following a quick Verratti free-kick.

There was still time for Ibrahimovic to get his 30th of the campaign from the penalty spot at the death after he had been brought down inside the area, as Paris recorded their biggest league win since the Qatari takeover that revolutionised the club in 2011.

Guingamp coach Jocelyn Gourvennec admitted his side had been “naive” but added: “It was a game between a great team and an average Ligue 1 team, which we are.

“They are programmed to go on and win the Champions League one day, and as they were so clinical so quickly we were never able to compete.”

Away from the battle for the Ligue 1 title, the biggest fixture in France this weekend will be at the Stade Velodrome on Sunday, when Marseille must beat third-placed Monaco to retain any hope of qualifying for next season’s Champions League at the principality side’s expense.