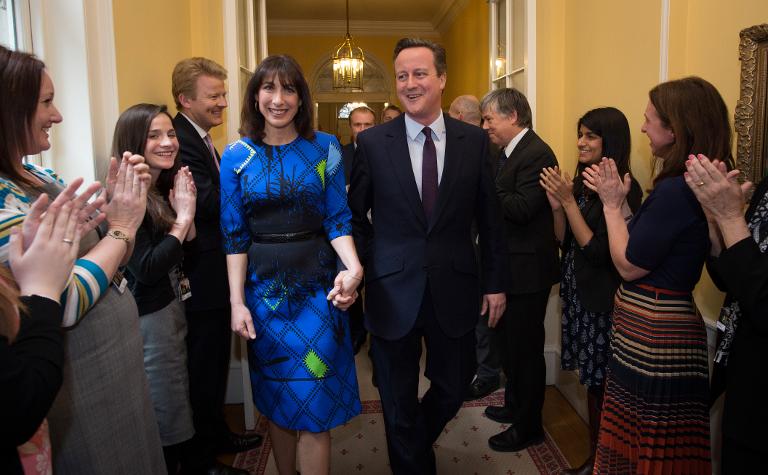 Prime Minister David Cameron’s Conservatives were on Friday celebrating a stunning victory in Britain’s general election, which cut short the careers of his top three rivals and put the country’s European Union future in doubt.

Widespread predictions of a close contest with the centre-left Labour opposition proved to be wrong, as Cameron won 331 out of 650 parliamentary seats and a new term as head of a majority centre-right Conservative government.

The victory in Thursday’s election was focused on England, however.

North of the border, the pro-independence Scottish National Party (SNP) won a historic landslide, just seven months after losing a referendum on breaking away from the rest of the United Kingdom.

In another dramatic result, the leaders of Labour, the Liberal Democrats and the anti-EU UK Independence Party (UKIP) all stepped down over their parties’ electoral drubbing.

Following his own re-election in Witney, near Oxford, Cameron travelled to Buckingham Palace in London, where he was reconfirmed as prime minister by Queen Elizabeth II, the head of state.

Ending five years of coalition government with the centrist Liberal Democrats, he announced to reporters outside 10 Downing Street: “I will now form a Conservative majority government.”

Cameron also named Chancellor of the Exchequer Osborne, seen as a potential future party leader, as “first secretary of state” — an honorific title that effectively makes him his number two.

The election victory is an endorsement of the Conservatives’ austerity programme and is likely to see a continuation of cuts to public spending as they seek to reduce a budget deficit of nearly Â£90 billion (120 billion euros, $140 billion).

The pound rallied and stocks rose as investors welcomed a clear result and a government seen by the markets as more “business-friendly” than the Labour alternative.

US President Barack Obama and German Chancellor Angela Merkel telephoned Cameron to congratulate him on what they both called an “impressive” victory.

But the election exposed deep political divisions and Cameron avoided triumphalism in his victory speech, promising to “bring our country together”.

He said he would deliver on manifesto pledges for the benefit of everyone in Britain, including an in-or-out referendum on the country’s EU membership by the end of 2017.

He also acknowledged the SNP’s surge, promising to give Scotland “the strongest devolved government anywhere in the world, with important powers over taxation”.

But the left-wing SNP came close to a clean sweep in Thursday’s election, winning 56 out of the 59 Scottish seats, up from just six in 2010.

“It is an extraordinary statement of intent from the people of Scotland. The Scottish lion has roared,” former SNP leader Alex Salmond said, as he was elected to the seat of Gordon.

Overall, Labour lost 26 seats to finish on 232, a poor showing for which Miliband said he took “absolute and total responsibility”, before standing down as party leader.

It was also a terrible night for the centrist Liberal Democrats, who lost 49 of their 57 seats as voters punished them for entering into government with Cameron after the previous election.

Clegg was re-elected but shortly afterwards resigned the party leadership, saying: “The results have been immeasurably more crushing than I could ever have feared.”

Nigel Farage stepped down as UKIP leader after failing to win his seat. His anti-EU, anti-mass immigration party came third in the share of the vote with 12.6 percent but won only one seat.

The election raises questions over Britain’s future in the EU, with Cameron confirming: “We will deliver that in-out referendum on our future in Europe.”

He has previously said he would campaign to stay in the bloc, provided he can secure changes to Britain’s terms of membership, notably on freedom of movement — although this has so far been met with resistance in EU capitals.

European Commission president Jean-Claude Juncker, whose nomination Cameron opposed, sent his congratulations saying he was ready “to strike a fair deal for the United Kingdom in the EU”.