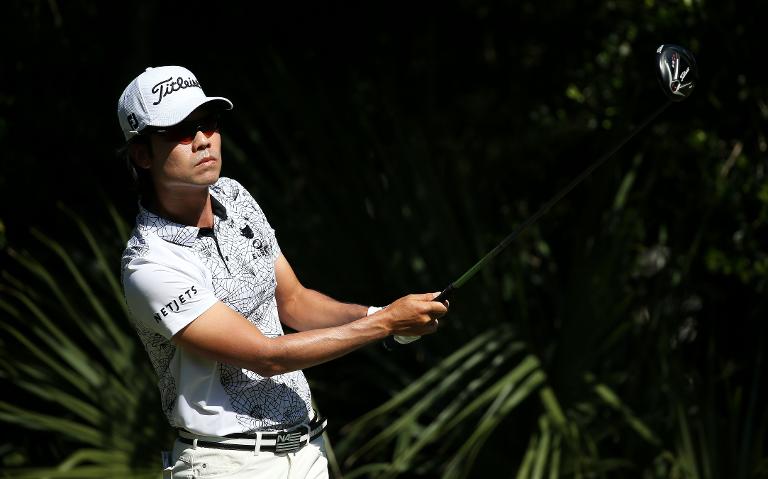 Kevin Na had an adventurous second round, offsetting three bogeys with a half dozen birdies for a three-under 63 to grab a share of the lead at the Players Championship.

Na’s roller-coaster round on the Stadium Course put him in a tie with fellow American Jerry Kelly who fired a seven-under 65 to finish 36 holes at eight-under 136.

South Africa’s Branden Grace posted a five-under 67 to move into a tie for third place at six under. He was joined there by Canada’s David Hearn (71), and Americans Chris Kirk (68) and Rickie Fowler (69).

World number one Rory McIlroy managed a one-under 71 and finished 36 holes at four under while two-time winner Tiger Woods birdied the ninth, his final hole, to make the cut on the number. Woods carded a 71 to end at even-par 144.

It marked the second time in four years that the 31-year-old Na started the tournament with a 67-69. In 2012, he shared the lead with Zach Johnson and eventual winner Matt Kuchar after two rounds.

Na led Kuchar by one stroke heading into the fourth round but stumbled to a 76, dropping him into a tie with two others for seventh place.

Na teed off in the morning Friday and he had an up and down beginning to his round. He missed the green at the first hole and made bogey. Na rebounded with a 17-foot birdie putt on two and a 19-footer birdie putt at three.

Na stumbled to another bogey at the fourth to slip back to five under. He birdied the fifth from 14 feet out and followed with five consecutive pars. He made bogey on number 14 but also had three birdies on the back nine.

“I came here and kind of worked out a few things off the tee. I had a few loose ones today, but overall, for the first two days, I felt like I hit it really good,” Na said.

“I had a couple loose tee shots (early), but as things went on, I kind of figured it out. I made some nice par putts, and that’s what you’ve got to do out here.”

Kelly, in the last group out off the 10th in the afternoon, birdied the last hole for a 65.

“It was a good number for me. I definitely got some breaks out there,” Kelly said. “I’m going to have to tighten up the swing a little bit. It felt great coming down the stretch, and that’s the only time I really felt the adrenaline start kicking in and I swung better.

First-round leader Hideki Matsuyama stumbled to a two-over 74 to dip into a share of 27th at three-under-par 141.