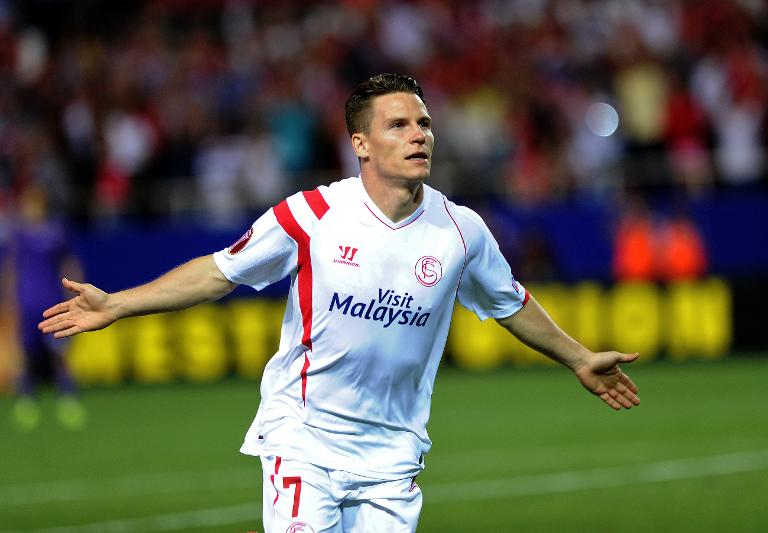 A brace of stunning goals from Aleix Vidal helped defending champions Sevilla to a commanding 3-0 victory over Fiorentina in the first leg of the Europa League semi-finals on Thursday.

In Italy, Napoli dominated large parts of their first leg match against Dnipro, but the Ukrainian underdogs scrapped it out for an unlikely 1-1 draw — and a vital away goal for the second leg.

Sevilla stretched their unbeaten run in European games to nine in handing Fiorentina a first away defeat in 13 games.

The La Liga side, bidding for a fourth Europa League title after winning in 2006, 2007 and 2014, took the lead in the 17th minute through the outstanding Vidal.

After a strong Machin Perez run, Carlos Bacca pirhouetted in from the left of the penalty box to send the ball out to fast-advancing Vidal whose perfectly-executed, first-time shot from the right edge of the area hit the net after sending Murara Neto the wrong way.

Jose Antonio Reyes saw his effort then go just wide as the Spanish side pushed for the double.

Vidal bagged his second in the 52nd minute, another fine shot from the right of the penalty box beating a wrong-footed Neto for the second time in the evening.

To make matters worse for Fiorentina, ex-PSG striker Kevin Gameiro added a third with 15 minutes to play, steering in Vidal’s strike after a Benoit Tremoulinas break down the left flank.

In Naples, Dnipro managed to take the sting out of the home side in the first half, all the while conceding possession and territory.

But Spaniard David Lopez corrected that for Napoli just four minutes into the second period, rising high to head home an inswinging Lorenzo Insigne corner for his maiden goal for the Italian club.

The Ukrainians kept a sting in the tail themselves, however, substitute Yevhen Seleznyov tapping in from close range after a scything Artem Fedetskiy cross in the 81st minute that Roman Bezus first missed.

Fourth in Serie A and fresh from a 3-0 win over AC Milan, Napoli pushed for the winner, but the Ukrainian side — a former rocket factory side that twice won the old Soviet League and have been a top four side for much of the past 20 seasons in Ukraine — held on with their crucial away goal.

The result will have Napoli coach Rafael Benitez concerned about the trip to Ukraine as he targets his third title in Europe — the Spaniard having won the Champions League with Liverpool in 2005, the then-UEFA Cup with Valencia in 2004 and the Europa League for Chelsea in 2013.

The second legs will be played on May 14 and the final in Warsaw on May 27, with a place in next season’s Champions League on offer to the winner for the first time.