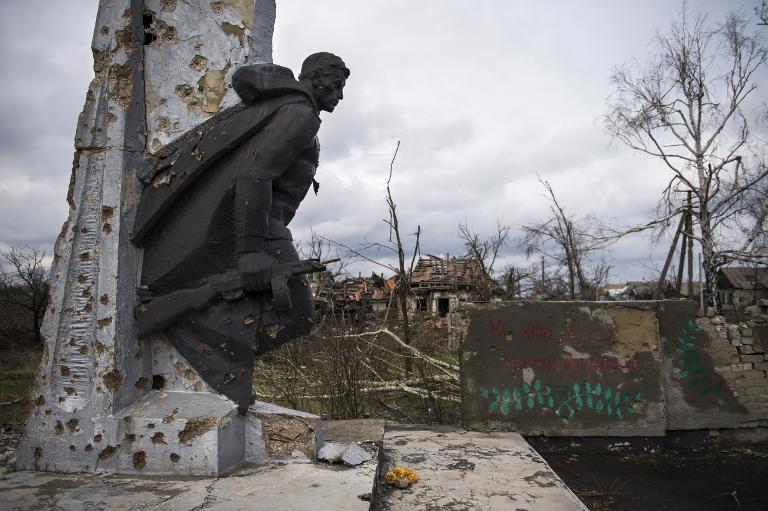 A new symbol, date and even name: Ukraine is distancing itself from Russia as it marks 70 years since victory over Nazi Germany in World War II while locked in a brutal conflict with pro-Moscow rebels.

For the first time the ex-Soviet country that lost millions of soldiers and civilians in fighting on both sides of the frontline during the war will mark May 8 — a date celebrated across much of Europe — as a “Day of Memory and Reconciliation”.

The traditional Soviet-era holiday May 9 remains Victory Day commemorating the Nazi defeat but, unlike in Russia, where a grandiose military parade will be held on Red Square, Kiev is planning a low key “March of Peace” by Ukrainian and European army bands.

“The Ukrainian commemorations, unlike those in Russia, are intended not to show aggression and military might but to remember those who died,” Ukraine’s presidency said in a statement.

Taking a leaf from the pages of countries such as Britain, Ukraine has also introduced the poppy as the official symbol for the event — pointedly eclipsing the orange and black Saint George’s ribbon that is ubiquitous in Russia and among the separatists.

Even the name of the conflict has changed in official Ukrainian announcements from the “Great Patriotic War” introduced by Soviet authorities to the Second World War.

The shift — that comes a quarter of a century after Ukraine gained independence from the USSR — is down to the current crisis that has wrenched Kiev and its former Soviet master Moscow apart, following the toppling of a Kremlin-backed leader last year.

Since then Moscow has annexed Ukraine’s Crimean peninsula and been accused of masterminding a bloody separatist conflict in the east that many in Kiev see as a defining battle against Russian expansionism.

“It is impossible to have a war with the Russians and wear the Saint George ribbons,” a senior Ukrainian official told AFP on condition of anonymity.

The country is attempting “to cut the umbilical cord with the Communist past”, the senior official said.

That move — and any attempts to review the history of WWII — has sparked anger in Russia, where the memory of the war is sacrosanct and used to whip up patriotic fervour.

In a stark show of the divisions, across the frontline in east Ukraine the pro-Russian rebels — who often portray their fight as a continuation of the WWII battle against fascism — will hold a military parade copying the celebrations in Moscow.

One of the most controversial moves this year by Kiev is a decision to commemorate the role of Ukrainian nationalist fighters who fought against Soviet troops, alongside Nazi forces, and are accused of slaughtering Poles and Jews.

Considered heroes by many in western Ukraine, the fighters of the Ukrainian Insurgent Army (UPA) are reviled in Russia, where authorities have accused Kiev of “glorifying Nazi accomplices.”

According to Kiev, some 7 million Ukrainians fought for the Soviet Red Army and on the side of the allies while some 250,000 sided with the Germans.

Ukraine’s culture ministry has skirted crimes committed by the nationalists.

“Deprived of their state, Ukrainians were forced to fight for the interests of others and kill,” the ministry said in late April.

Historians say the authorities in Kiev are trying to airbrush history by manipulating memories of the past to suit their current goals, albeit to a lesser extent than Russia.

“The government is using history as a tool,” Yaroslav Grytsak, a prominent Ukrainian historian, told AFP.

“Nobody wants to talk about subjects that deal a blow to national pride, especially when there is a war going on,” he said.

“Ukrainians won’t be able to make proper sense of their historic memory until after the current conflict.”