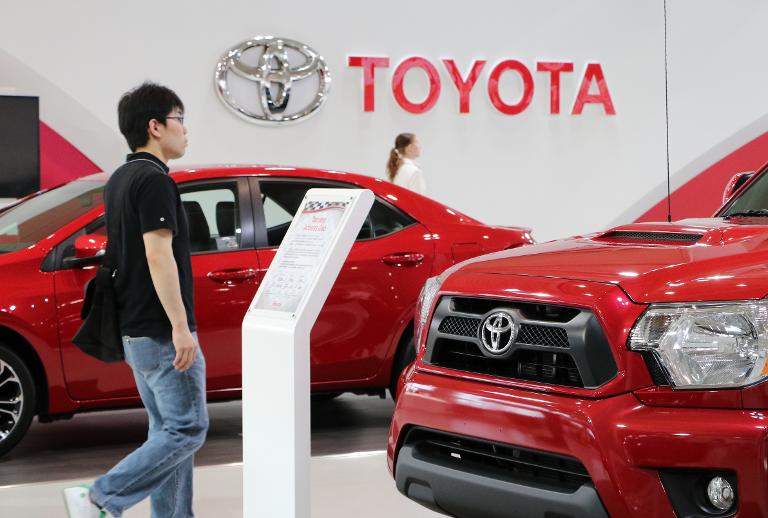 Toyota said Friday its annual profit accelerated 19 percent to a record $18.1 billion as the world’s biggest automaker capitalised on a weak yen and strong demand in North America, despite a damaging string of recalls.

The company beat earlier forecasts with its 2.17 trillion yen net profit ($18.1 billion) in the fiscal year to March — bigger than the combined 2014 profit of Volkswagen and General Motors.

Despite weakness in Asia and industry concerns about a slowdown in major market China, Toyota also said it was on track for a bigger 2.25 trillion yen net profit in the current business year.

Toyota’s latest operating profit rose 20 percent — largely owing to cost cuts and a sharp decline in the yen, which inflates the value of exporters’ repatriated profits — even as sales edged lower to 8.97 million units.

Including the Hino and Daihatsu brands, Toyota moved a slightly higher 10.16 million units.

Sales to North America and Europe rose, while they turned down in Asia and specifically in Japan, where consumer spending dived after the government hiked sales taxes last year.

Chinese sales rose 7.4 percent in the latest period, however, although GM and Volkswagen still outsell Toyota in the world’s biggest auto market.

“We are expecting the North American market to continue its strong performance, but we see sales volume falling in Asia where the environment is becoming increasingly tough, as well as emerging markets such as Russia and the Middle East,” Executive Vice President Nobuyori Kodaira told a press briefing in Tokyo Friday.

Toyota said it is planning a 300 billion yen share buyback after an investor meeting in June.

But president Akio Toyoda added that his family company still needed to be “reborn” to cope with an “uncertain” global auto market.

Last month, Toyota announced it was ending the construction freeze as it unveiled plans for a $1.0 billion plant in rising Mexico and another production line in China.

The firm is also overhauling its production methods, vowing to slash development costs in a bid to offset any downturn in the market.

“But recalls will remain a potential serious risk at a time when the use of common parts is a global trend.”

Toyota is working to recover its reputation for safety after the recall of millions of cars globally for various problems, including an exploding airbag crisis at embattled supplier Takata, which posted an annual loss on Friday.

Rival automaker Honda last month said its fiscal-year net profit fell 8.9 percent as it grapples with soaring recall-related costs, including from the Takata airbag crisis which has been linked to at least five deaths.

The airbag affair sparked the recall of more than 20 million vehicles worldwide by 10 major automakers.

As part of moves into growing markets, Toyota is tapping demand for environmentally friendly cars, especially in China which is struggling to contain an air pollution crisis.

Toyota was swamped by domestic orders for its first mass-market hydrogen Mirai fuel-cell car, while it has also announced plans to develop components for hybrid vehicles with two Chinese automakers in an unprecedented technology-sharing deal.

The agreement marked a shift away from Japanese carmakers’ traditional reluctance over such deals for fear of losing their competitive edge.

Toyota shares rose 0.79 percent to 8,279.0 yen in Tokyo before the earnings were released.