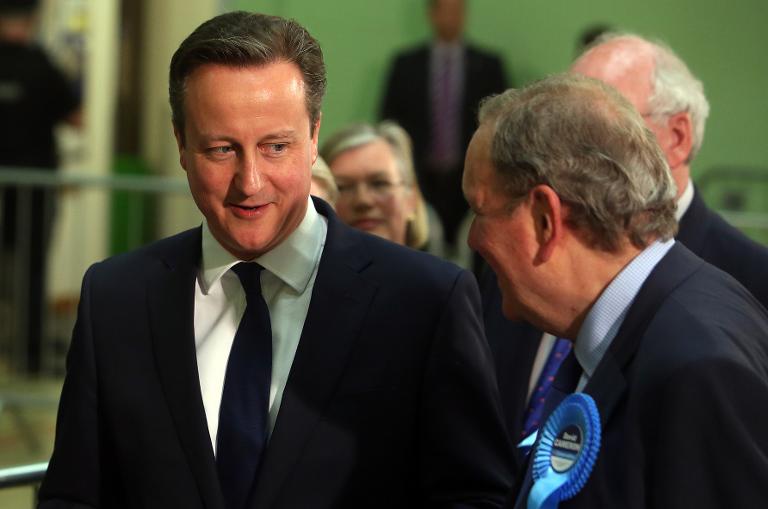 David Cameron may be on course for a bigger than expected mandate at the British general election but could ultimately end up a more constrained prime minister, experts said Friday.

After five years in coalition with the centrist Liberal Democrats, exit polls and early results showed Cameron’s centre-right Conservatives well placed to form a minority government on their own.

The Conservatives had been neck-and-neck with the opposition centre-left Labour Party throughout the campaign and seem to have pulled off a shock late swing.

However analysts said that without the Lib Dems — whose support has collapsed — and the coalition’s comfortable majority, Cameron could struggle to push through significant legislation.

“It is most likely David Cameron will stay on as prime minister with a minority Conservative government. That’s a long way from what most people, including me, were expecting,” said Tony Travers, a politics professor at the London School of Economics.

However strengthened Cameron might personally be by the election result, he may struggle to be bold in government.

“Cameron will cease to be the prime minister of a government with a secure majority,” said LSE political science professor Patrick Dunleavy.

“The paradox is David Cameron survives as prime minister but prime minister of a minority government which doesn’t have the votes to do anything radical.”

The dramatic downfall of the Liberal Democrats also has profound implications for Cameron, experts said.

With many Lib Dem seats going to the Conservatives, Dunleavy said Cameron had “eviscerated” his coalition partners, who were now “almost going to cease to exist”.

Cameron — who describes himself as a liberal conservative — was previously in a strong position in the coalition government as a bridge between the Lib Dems and the Conservative right.

But without the Liberals, he may be forced to shift to a more right-wing stance.

A further complication is that Cameron has said he would not remain as prime minister beyond 2020, raising the prospect of a Conservative leadership race in the coming years.

But the past experience of previous prime ministers such as Tony Blair suggests that, having announced his departure date, Cameron could face a leadership challenge sooner than he would have liked.

– EU referendum on the way –

A Cameron-led government would mean Britain presses ahead with holding an in-or-out referendum on EU membership by the end of 2017, as he had vowed.

Cameron has vowed to renegotiate London’s relationship with Brussels and then go to the electorate, saying he wants Britain to remain in a reformed EU.

Sara B. Hobolt, a European politics professor at the LSE, told AFP that Cameron had “antagonised” EU colleagues in the past but would now have to strike deals.

“Cameron will very quickly have to come to Brussels and negotiate a settlement,” she said.

“Some European leaders will relish seeing Cameron make the case for the EU because they feel it is a case he has never made.

“He certainly has the potential for alliances.”

While other European countries have reacted to the financial crisis by turning to radical leftist parties, Britain seems to have rejected even a moderate centre-left alternative.

“The British people have, in the end, have decided to go for caution,” Travers told AFP.

“That begs a big question for the left in Britain — what do they have to do, especially after what happened in 2008, to be credible and come up with an alternative opposition?”