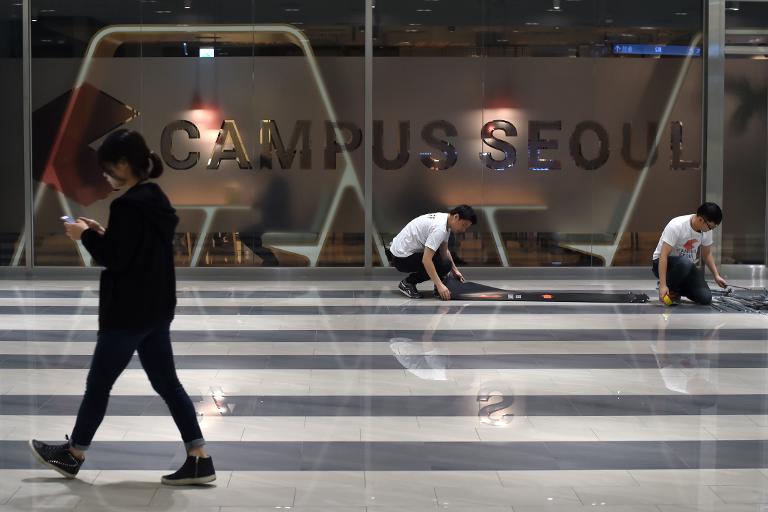 Google formally opened its first Asian start-up “campus” in Seoul on Friday — a marquee-name nod to South Korea’s aspirations as a regional hub for a new generation of tech entrepreneurs.

Opened by President Park Geun-Hye who has touted establishing a “creative economy” as a key policy for her administration, Campus Seoul is housed in the capital’s upscale Gangnam district which has become a focal point for the Korean start-up community.

As well as providing a space for people to work and network, it offers mentoring and training by Google teams and experienced entrepreneurs, as well as access to other start-up communities in Asia and beyond.

“We feel we’re at a tipping point where Korean start-ups will begin going global,” said Jeffrey Lim, who heads the Seoul Campus operations.

It’s a point that has been touted as tipping for some time, nudged by a highly educated, hard-working community in a country with some of the world’s fastest broadband speeds and highest smartphone penetration rates.

But despite the domestic success of some start-ups, Korean firms have struggled to take their products to the global market.

There are a variety of reasons, including a lack of funding and know-how, well-intentioned but overly regulated government involvement, and the absence of any real role models.

— Fear of risk and failure —

There are also challenges that are particular to South Korea because of its recent history.

The Asian financial crisis that rocked the country in the late 1990s and the bursting of an initial dotcom boom in 2001 served to reinforce the widely held view that taking risks and running your own business was to invite volatility, insecurity and potential bankruptcy.

“When bright, young Korean graduates want to create their own start-ups, the biggest challenge they face is often their parents,” said Lim.

“They still push them towards the security of jobs with the big conglomerates like Samsung and LG. They still feel that’s the gold standard for how they raised their kids,” he added.

But for those with the courage to take the plunge, there are encouraging signs that things are changing.

“And the good thing about Korea, is that when we change, we have shown we can change very fast,” said April Kim, co-founder and CEO of ChattingCat – a start-up providing an instant English-language correction service for non-native speakers.

The 33-year-old, who has already moved her tiny team into Campus Seoul, believes a major corner has already been turned, with overseas venture capital firms setting up shop in South Korea and Korean entrepreneurs starting to create start-up incubators and accelerators.

The government has also stepped up, with Park’s administration in 2013 unveiling a 3.3 trillion won ($3.0 billion) fund to nurture start-ups over the next three years.

In the past two years, Kim has received more than $60,000 in government funding, a sum she was extremely grateful for when she was struggling to get her company up and running.

But the money came with a substantial cost in time and effort.

“There was so much paperwork! For my first 20K I had to write an 80-page report. And every quarter, they want an accounting of how the money is being spent,” Kim said.

“There’s a lot of frustration and wasted energy,” she said.

“The problem is that the side providing the funding is not really looking at making the business more successful,” the 34-year-old said.

“There’s a lot of distrust and wanting to make sure the money is being spent in the ‘proper way’,” he added.

The Google campuses are not-for-profit projects that the US tech giant says carry the over-arching benefit of widening the Internet eco-sphere. The Seoul outpost is modelled after similar facilities in London and Tel Aviv, and soon to be Warsaw and Sao Paulo.

Basic membership is free and space is provided at very low rates. Google has no financial stake in the start-ups that use the Seoul campus, although it clearly doesn’t hurt to have a close eye on what might become the next Twitter or Uber.

For both Kim and Park, it’s a welcome resource where they can meet other small teams like their own, share experiences, pursue possible collaborations and, hopefully, identify and open doors to venture capital funding.

But in terms of growing, they still lack the models for how to move beyond the Korean market.

“I’m at a stage where I need mentors and connections, but they are hard to find,” Kim said.

“I hope there will be at least one Korean start-up that makes it on a global scale in the next few years. It would give a lot of people hope and help others to learn and follow.”