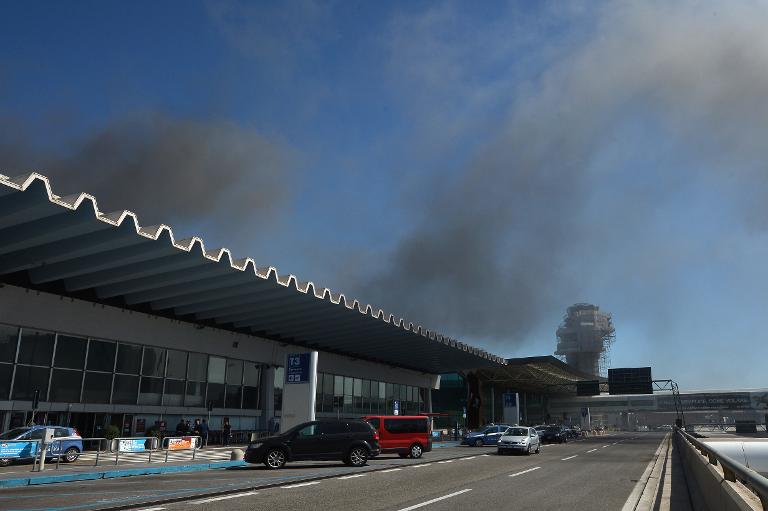 Scores of flights were cancelled and thousands of passengers had their travel plans wrecked after a fierce fire devastated part of a terminal at Rome’s Fiumicino airport.

The city’s main airport was closed to passengers for several hours after a blaze triggered by an electrical fault in a bar broke out in terminal three, which is used for international flights.

When the airport reopened, there were scenes of total chaos with thousands of people trying to find out what was happening and frantic airport staff desperately attempting to deal with the backlog and match disorientated and frustrated passengers to seats on waiting planes.

The first departures of the day involving planes carrying passengers did not take place until after 2:00 pm (1200 GMT) and some carriers saw their entire day’s schedule in and out of the airport wiped out.

Italian carrier Alitalia said airport authorities had asked all airlines to cancel about half their Friday flights, and said it would try to offset the disruptions by using larger aircraft.

Three airport employees were treated for smoke inhalation but there were no serious injuries.

The fire erupted shortly after midnight and was not brought fully under control until more than five hours later, by which time the authorities had decided to cancel most of the morning’s flights and close the airport to passengers.

A shopping area in the terminal which is home to a string of upmarket boutiques was devastated.

“The bit beyond the security gates where the shops are has been completely destroyed but the rest is usable,” said Lorenzo Lo Presti, the head of Airports of Rome, the private company which runs Fiumicino.

The chaotic scenes prompted calls for a probe into why a fire limited to one terminal had caused such disruption over the entire airport for hours.

“You have to ask why the company that runs the airport did not have adequate plans in place to deal with an event of the kind that happened overnight,” said Michele Anzaldi, a member of the National Assembly.

“If it had to resort to closing everything it means something has gone wrong,” the centre-left deputy added. “There was no plan B.”

Anzaldi and other lawmakers said the day’s events showed Rome was far from ready to cope with an anticipated surge in tourist arrivals as a result of the jubilee year declared by Pope Francis from December 8.

Firefighters said it could take several days to make the area hit by the fire safe.

The terminal is one of four at the airport and serves flights to European countries outside the Schengen no-borders zone and destinations further afield with the exception of Israel and the United States.

Vito Riggio, president of the national civil aviation authority, told reporters at the airport that the cause was “probably a short circuit”.

Police do not suspect any foul play.

As tempers frayed at the airport on a swelteringly hot day, there were also angry scenes at Rome’s main railway station where thousands of passengers arrived to discover all trains to the airport, which is on the coast around 30 kilometres (20 miles) west of the city, had been cancelled.

The express train link resumed mid-morning but that only served to exacerbate the congestion at the airport.

With passengers being switched from the fire-hit building, huge queues built up at the other terminals.

One of the airlines which flies in and out of terminal three, British Airways, had to cancel seven of its eight flights from London Heathrow to Rome and reschedule the other one to Naples, which is a 95-minute train ride or two-hour drive south of Rome.

Intercontinental flights arriving after overnight trips from the United States and elsewhere were able to land on Thursday morning and some planes took off before midday with only crew on board to ensure they could meet schedule commitments elsewhere.

Alitalia, the airline which has the most flights to and from the airport, advised passengers they could switch to alternative flights up until Sunday or have the price of their tickets reimbursed.

Other airlines made similar commitments, in line with European Union regulations.