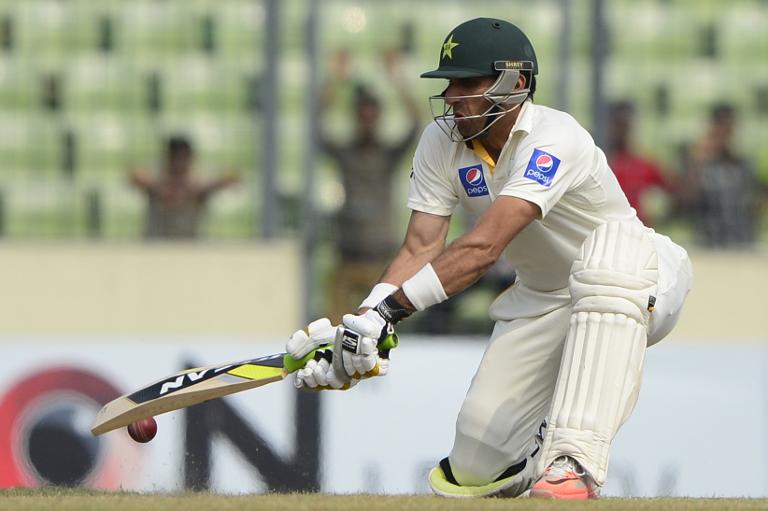 Bangladesh faced a long haul to save the second and final Test against Pakistan in Dhaka after they were set an improbable victory target of 550 on the third day on Friday.

The hosts were 63 for one at stumps with Tamim Iqbal (32) and Mominul Haque (15) together at the crease after Imrul Kayes was bowled by Yasir Shah for 16 on a wearing pitch at the Sher-e-Bangla stadium.

Bangladesh will still need to bat out six sessions over the last two days to avoid losing the short series after the first Test ended in a draw in Khulna last week.

Bangladesh’s highest fourth innings score to win a Test is 217 against the West Indies in 2009.

The Tigers were bowled out for 203 in their first innings before lunch in reply to Pakistan’s 557-8 declared, but the tourists did not enforce the follow-on despite a a mammoth lead of 354 runs.

Batting a second time, Pakistan declared their second innings at 195-6 with skipper Misbah-ul Haq leading the way with a 72-ball 82 that included nine boundaries and three sixes.

Pakistan lost opener Mohammad Hafeez before lunch, caught behind by hard-working seamer Mohammad Shahid off the fourth ball of the innings.

Misbah put on 58 for the fourth wicket with Younis Khan before he closed the innings soon after he was sixth out caught in the deep in a bid to step up the run-rate.

Pakistan are seeking their first win on the month-long after being routed 3-0 in the one-day series and losing to Bangladesh for the first time in a Twenty20 international.

Bangladesh, resuming the day at 107-5, conceded the huge lead despite an unbeaten 89 off 91 balls by Shakib Al Hasan that included 14 boundaries and two sixes.

Shakib, who was on 27 when the eighth wicket fell at the total of 140, smashed 62 of the 63 runs he added for the ninth wicket with Mohammad Shahid, who held firm at the other end for nine overs.

Shakib admitted his team faced a tough task, but vowed to go down fighting.

“We won’t give up without a fight, that’s for sure,” the star all-rounder said. “Nobody has ever chased such a total so if we don’t play well tomorrow, we won’t be thinking about the chase obviously.

“But if we can get a 200-run stand from the top-order, we can build from there. There is a lot of time left in the game and the wicket is not as slow or low as it was in Khulna.

“If we can spend the first hour tomorrow without losing a wicket, we have hope in this match.”

Shakib said he was surprised by Pakistan’s decision to bat again instead of enforcing the follow-on.

“Frankly, I did not expect them to bat again,” he said. “I don’t know why they did that. But hopefully this will go in our favour.

“I am sure they will think about their decision if we have a big partnership tomorrow. It would, even for a short time, give them some tension.”

Shakib raced to his half-century with two consecutive boundaries off leg-spinner Yasir and celebrated the landmark with a six later in the same over.

Wahab Riaz and Yasir picked up three wickets each.