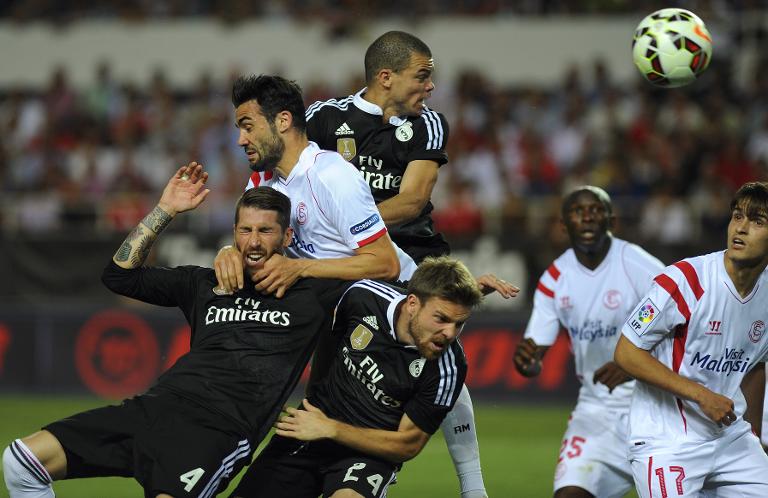 Real Madrid and Barcelona can’t afford a Champions League hangover as their La Liga title hopes will again be on the line on Saturday as they host Valencia and Real Sociedad respectively.

However, the title race has been overshadowed by the threat of possible shutdown of the league season next weekend due to an ongoing row between the Spanish Football Federation, the players’ union and the league over the distribution of funds from a new law passed allowing the centralised selling of television rights.

Senior players from both Real and Barca, including club captains Iker Casillas and Xavi Hernandez, were present at a press conference on Thursday that backed the players’ union’s stance unless a solution is found before next weekend.

Madrid trail Barca by two points at the top of the table with three games to play and face the significantly tougher task this weekend against a Valencia side looking to seal their place in next season’s Champions League with a fourth-place finish.

Valencia ended the European champions’ 22-game winning streak when the sides met back in January and Madrid could also pay for their efforts in losing 2-1 to Juventus in the first-leg of their Champions League semi-final on Tuesday.

“It has an influence, but they have great players and a very good technical staff that know how to manage the players,” Valencia striker Paco Alcacer said on Thursday.

“However, we can only look after ourselves. It is important that Valencia are in the Champions League and that is all we are focusing on.”

“It is clear we can beat Madrid. We go there with the mentality that we can take the three points and keep going towards our objectives.”

Madrid could have striker Karim Benzema back as he returned to training on Thursday having missed the last six games due to a knee injury.

Valencia will be without former Madrid forward Rodrigo through suspension, but Jose Luis Gaya is expected to start despite continued interest from Real in signing him come the end of the season.

Barca could move five points clear at the top before Madrid kick-off at the Bernabeu as they host David Moyes’s Real Sociedad at the Camp Nou.

A 1-0 defeat to Sociedad in January proved to be the turning point in Barca’s season as coach Luis Enrique controversially left Lionel Messi and Neymar on the bench after they arrived back from their Christmas break in South America later than the rest of their teammates.

Both men were on target as the Catalans all but booked their place in the Champions League final with a 3-0 win over Bayern Munich on Wednesday to register their 27th win in 29 games since that reverse in San Sebastian to remain on course for a treble.

“It was our objective since the start of the season and we are getting closer all the time,” said Neymar.

“In La Liga we have a very difficult game this weekend and we need to fight until the end.”

Should Valencia lose to Real, Atletico Madrid can mathematically seal third place and an automatic return to the Champions League next season when they travel to Levante on Sunday.

Levante are one of six sides still fighting for survival and Granada look the most likely to boost their chances of beating the drop this weekend when they host already relegated Cordoba.

A Valencia defeat could also open the door to Sevilla in the fight for fourth place as they would move level on points with Los Che with a win at Celta Vigo on Sunday.