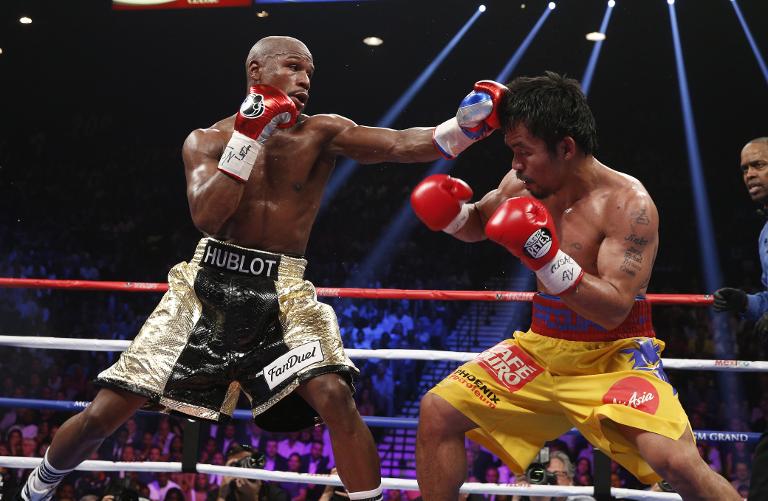 Floyd Mayweather has branded Manny Pacquiao a “sore loser” and a coward and says he won’t delay his planned retirement to grant the Philippine icon a rematch next year, in an apparent U-turn.

And he dismissed Pacquiao’s claim that he had been carrying an injury in Saturday’s one-sided win for Mayweather, the American calling it “Excuses, excuses, excuses.”

Mayweather took his unbeaten record to 48-0 in Las Vegas with a 12-round unanimous decision over Pacquiao in a welterweight world title bout that will go down as the most lucrative in boxing history.

In an interview recorded this week to be aired on Showtime television on Saturday, Mayweather says he did text ESPN’s Stephen A. Smith that he would grant Pacquiao a rematch — but he has changed his mind.

The 38-year-old says he couldn’t detect any physical problem for Pacquiao during the bout, after which the Filipino and his camp said he was suffering from a right shoulder injury.

Although Pacquiao had arthroscopic surgery to repair a torn rotator cuff in Los Angeles on Wednesday, Mayweather said his plea of injury was nonsense.

“He lost. He knows he lost. I lost a lot of respect for him after all of this,” said Mayweather.

As to the flip-flop on a possible rematch, Mayweather said simply: “I change my mind.

“At this particular time, no, because heâ€™s a sore loser and he’s a coward… If you lost, accept the loss and say, ‘Mayweather, you were the better fighter.'”

Mayweather has said his last fight will be in September, when he will complete his six-fight deal with Showtime and then retire.

With a victory in that fight against a still-to-be-named opponent, Mayweather would match Rocky Marciano’s iconic 49-0 ring record.

He has insisted he would be happy to retire with that mark and wouldn’t be tempted to stay around and try to make it a round 50 victories.