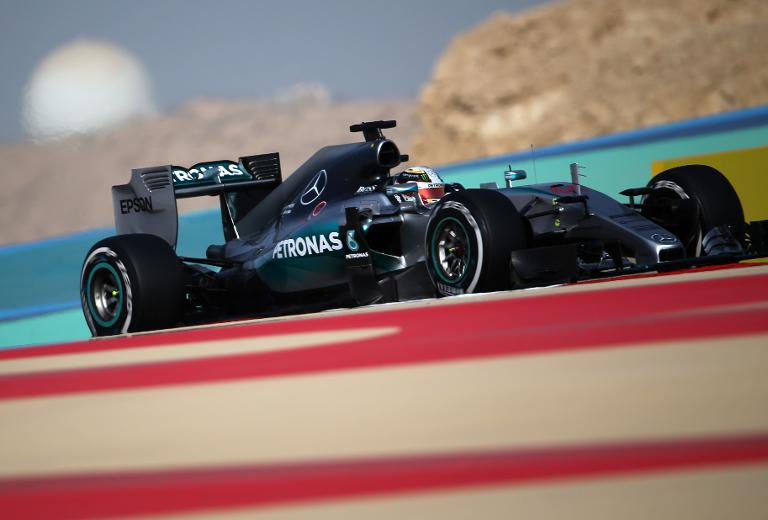 Lewis Hamilton is more in love with Formula One now than he has been in the past -â€“ and he relishes the technical challenge of beating his rivals to stay on top.

As Mercedesâ€™ team-mate Nico Rosberg seeks a way to defeat his partner for the first time in five races this year, and rivals Ferrari raise their performance potential in pursuit of a second triumph, two-time world champion Hamilton admitted Thursday that he relishes the pressure.

â€œThe season is going very well and we are feeling the challenge, but I wouldnâ€™t want it any other way.â€

Ahead of this weekendâ€™s Spanish Grand Prix at the sun- and wind-swept Circuit de Catalunya, the Briton said he is enjoying a more innovative and technical approach to his racing this season.

â€œI feel very happy with how it has gone,â€ he said.

â€œI left the last race thinking it has been a great couple of weeks. When you have a year like last year, to continue with it is not easy, but so far it has been better than last year.

â€œI am by no means in the clear, we have a long way to go and I know others are working very hard to close that gap so I need to stay on my toes, really continue to be innovative with the things I do on track and with my engineers to extract the most we possibly can.

â€œWe arrive at the track every weekend and do the same thing, so (for me) it is trying to be innovative with the set-up, trying new things, new approaches, different techniques, all those different things.

â€œWhen it’s driving against competitors, for example, it is not using the same patterns, it is coming out with new, fun, exciting ways of getting around the corner or attacking a driver, which is what I love — and is probably why I love the sport more now than I have in the past.â€

At 30, Hamilton has clearly matured into a more independent thinker.

Widely regarded as one of the most aggressive and flamboyant racers, he is now adding to that natural flair for speed with a greater understanding of, and desire to use, his engineering team and the potential of his car.

Ironically, at the very time when team-mate Rosberg appears to be struggling to match his sheer speed, Hamilton has chosen to prove he can match the Germanâ€™s supposedly superior â€˜thinkingâ€™ style of racing.

Rosberg, however, dismissed the notion that he has slowed down this season, in relation to Hamilton, and instead suggested he can win this weekendâ€™s Spanish Grand Prix, if he “maximises” his performance.

The 29-year-old German, who is 27 points behind the Briton in this yearâ€™s driversâ€™ championship after the opening four races, was in bullish form on Thursday.

â€œOf course, the results speak for themselves and it is pretty clear,â€ he conceded, when asked specifically about his disappointing form this year and theories that he is already struggling to match Hamilton.

â€œBut, for me, Barcelona is a race on its own and I come here after a personal boost from Bahrain and I just want to optimise this weekend.

â€œThatâ€™s it and I am not really thinking about it more than that.â€

In each of the four Grands Prix so far, Hamilton has been dominant, beating his team-mate in qualifying and the races.

â€œIt’s just a matter of maximising the weekend and it’s not really come together until now,” added the German.

“Parts have gone well, but other parts not so well and I just need to put it all together. Of course I will try to do that from now onwards.â€

Looking composed in a regulation black team t-shirt, Rosberg said red was the colour that he and Mercedes now feared most in the form of Ferrari.

“We expect it to be similar now to the last couple of races,â€ he said.