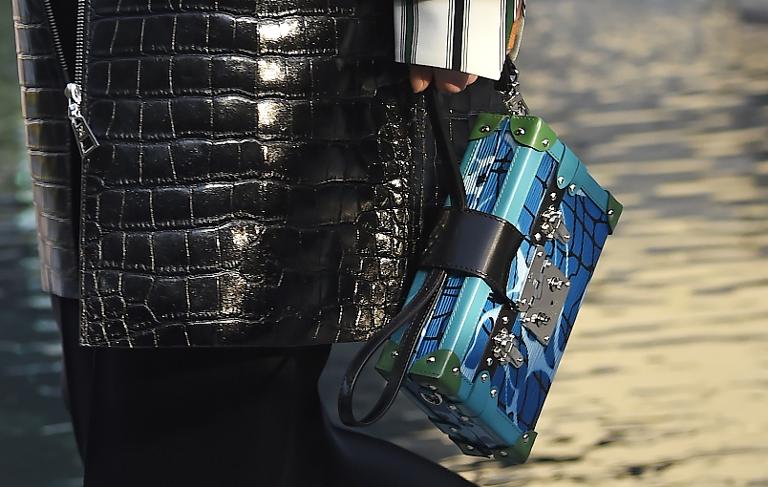 Luxury brand Louis Vuitton lured a bevy of stars to the California desert to see its latest cruise collection by Nicolas Ghesquiere — further evidence of the Los Angeles area’s rise on the world fashion scene.

An A-list audience of about 500 — from legendary French actress Catherine Deneuve to rapper Kanye West to LVMH chairman Bernard Arnault — trekked to the Bob and Dolores Hope Estate in Palm Springs for the glittering event.

Their hair flowing in the wind, towering models strolled between the chairs set up on the estate’s patio, sporting long flared gowns in muted desert hues, with cut-outs at the hips, belts and studs, or lace accents.

The estate — a concrete structure with circular and futuristic shapes — is considered an architectural masterpiece dating back to 1973 and designed by American John Lautner.

“What inspired me very much is the contrast in this home between a certain brutalist exterior — it is very radical — and the softer, more decorative items inside,” Ghesquiere told AFP at the event late Wednesday.

Ghesquiere — the man behind the revival of Balenciaga who moved to Louis Vuitton in late 2013, replacing Marc Jacobs — said he imagined “a community of women that live in the desert.”

With fluid silhouettes, and some outfits in leather, he said he “almost wanted to create confusion” among materials by favoring the idea of “movement, which is important for Vuitton — a woman who moves.”

Before the show, guests were received inside the home, where models dressed glam-rock style — think David Bowie — formed a living sculpture.

Louis Vuitton is the third major luxury brand this year to hold a show in California, after Tom Ford and Burberry staged shows that drew high-wattage stars from the film and music worlds.

Just as Palm Springs is experiencing a bit of a jet-set renaissance, California is back on the fashion map.

“In the 1950s, Palm Springs was the symbol of things modern. After that it faded, but there is now a true rebirth,” Louis Vuitton chief executive Michael Burke told AFP.

“New York is a world capital of culture but very strongly tied to Europe. For the whole world, it is California that represents what is modern in America,” he added.

“Fashion caters to celebrities, the new icons and trendsetters of our society,” said Cecilia Dean, co-founder of the fashion magazine Visionaire.

“A lot of fashion is impregnating the city,” she added. “It is not the city of sweatpants anymore.”

Cruise collections have sometimes been given short shrift in the fashion world. They are shown between the industry’s main seasons — spring and autumn — and in the past were limited in scope.

Vuitton wants to expand the cruise concept — and keep the show on the road. Before Palm Springs, Ghesquiere last year unveiled his cruise collection in Monaco, another A-list hotspot.

“It is the most important collection in terms of sales,” Burke said.

Staging a catwalk show in a glamourous location gilds a fashion house’s image but also helps consolidate ties with clients, who came to Palm Springs from around the US, but also from China, Canada and South America.

As for the cost of staging such an event, which can reach into the millions of dollars, Burke said it is worth every cent.

“In Paris, fashion shows are mainly for the press and store buyers, and customers can end up getting ignored,” said Burke.

“Here, we had the chance to lure customers for three days in a very civilized atmosphere — something fashion weeks cannot offer.”