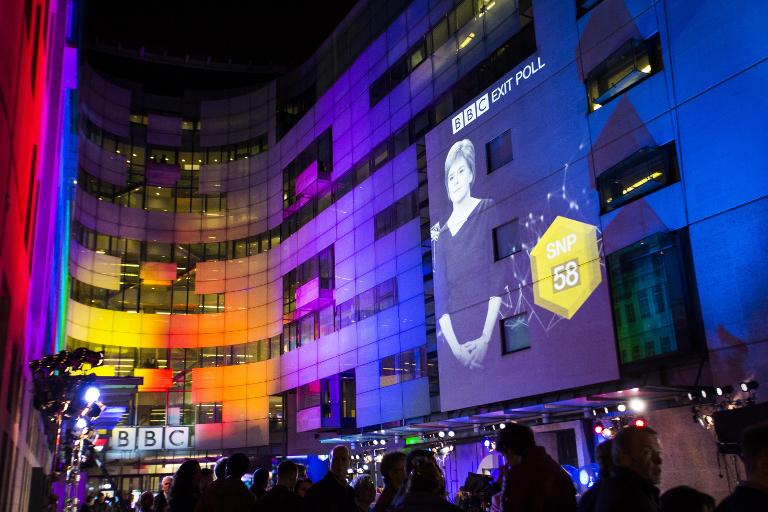 Boasting Britain’s youngest MP for centuries and the scalp of the Labour party’s leader north of the border in the country’s election, Scotland’s nationalists romped towards a historic leap forward on Friday.

The Scottish National Party (SNP) is forecast to win 58 out of 59 parliamentary seats in Scotland in a result which could increase pressure for a fresh referendum on independence.

“There’s a lion roaring in Scotland tonight, a Scottish lion, and I don’t think any government of any political complexion is going to be able to ignore it,” former SNP leader Alex Salmond told Sky News.

BBC broadcaster Jeremy Vine noted that the extent of the voter swing to the SNP was so unprecedented it “almost broke the swingometer” — the broadcaster’s gauge of voting trends.

The extent of the victory was embodied by the success of SNP candidate Mhairi Black, a 20-year-old student who unseated Labour’s campaign chief to become Britain’s youngest MP since 1667.

Labour’s leader in Scotland, Jim Murphy, was also defeated by the SNP in a deeply embarrassing lost for the main opposition party in what was once one of its heartlands.

Under new leader Nicola Sturgeon, the SNP enjoyed a surge of support that saw its membership quadruple after it lost September’s referendum on Scottish independence, in which 55 percent of Scots voted against breaking off from the rest of the United Kingdom.

The referendum paradoxically had the effect of invigorating the nationalist campaign, which has accused Prime Minister David Cameron’s government of breaking promises on granting Scotland more autonomy.

“The SNP has done almost a complete wipeout,” said Patrick Dunleavy, a professor of political science at the London School of Economics.

Voters across Glasgow, Scotland’s biggest city which was once a Labour stronghold, said that they hoped for a stronger voice for their nation in parliament.

“Whatever the outcome, whatever party wins, they are going to need to change how they see Scotland as a political entity,” said John Lyons, a retired civil servant casting his ballot.

Scotland has had a devolved government in Edinburgh since 1998, although major decisions about tax and spending, defence and foreign policy are still taken in London.

The desire for greater powers and influence is a common refrain in Glasgow, a once proud shipping and industrial hub.

“I don’t think Westminster or the central government has given Scotland enough credit or enough power,” said Sam Aaron, a 38-year-old doctor.

John James Swift, a 19-year-old student, said the election was “a chance that more people will have their voices heard”.

“The biggest thing I want is independence. As soon as possible, in the next year and a half, two years. And a fairer society,” he said.

The pain of budget cuts under Cameron are keenly felt in Scotland, where memories of former prime minister Margaret Thatcher — who is blamed for the decline of many traditional industries — are still raw.

“We need a lot of changes regarding all the austerity. There are so many people struggling, struggling,” said Mary Johnstone, 86.

With the Conservatives tipped to become the largest party in the new parliament, the SNP may not get to shape policy but the size of their bloc will give them a powerful voice at Westminster.

Sturgeon said in the election campaign she would seek to block the Conservatives forming a coalition or minority government and would work with old enemies Labour.

She has not made clear when she hopes for a new independence referendum but some experts suggest the issue could come to the fore again if there is a referendum on Britain leaving the EU, as Cameron has promised.

Labour leader Ed Miliband reached out to Scottish voters during the campaign saying that he understood their “patriotism and pride”, but the SNP surge ate into traditional Labour strongholds and damaged his chances in the election.

“Obviously its a very, very bad night for Labour across the UK,” said Scottish Labour party activist Matt Kerr, as the electoral map of Scotland turned yellow, the SNP’s colour.

“We have to get back on our feet and start again.”