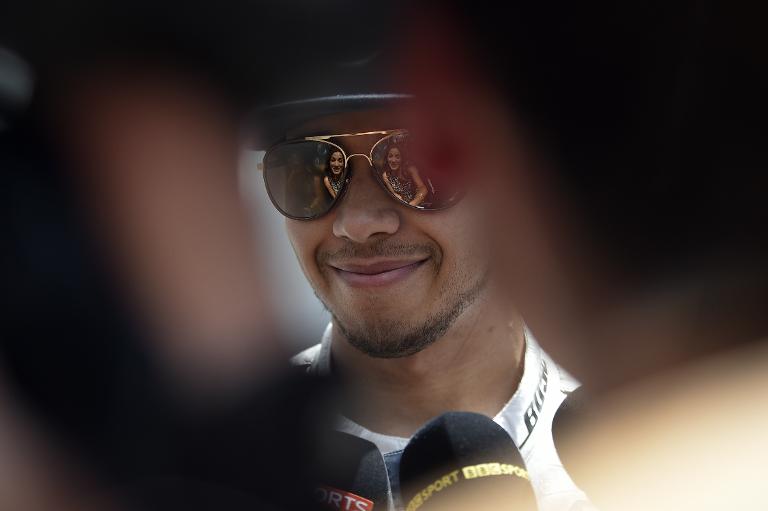 The 30-year-old Briton conceded that he was concerned by the set-up of his car and the conditions.

Asked if he was happy with the balance of the Mercedes, Hamilton replied: “At the moment Iâ€™m not.

â€œI donâ€™t really know why. It felt very inconsistent throughout the lap because the wind is up and down. In some places youâ€™re getting gusts, but sometimes youâ€™re not getting a gust.

â€œSo that makes it very difficult to find the set-up. I donâ€™t know if there is less grip because this is what we started with today â€“- itâ€™s like Melbourne.”

Hamilton added that he was also concerned at the determined manner in which Rosberg had applied himself on Friday.

â€œI think heâ€™s going to be quick. I just need to be quicker,â€ said Hamilton who has won three of the four races this season, opening a 27-point lead.

Driving with his usual plan and precision, the two-time world champion clocked a best lap in one minute and 26.852 seconds to finish almost half a second clear of nearest rival four-time champion Sebastian Vettel of Ferrari.

Rosberg, given a reprimand during the morning for infringing the pit-lane entry lines as he worked his way to the fastest lap of that session, wound up seven-tenths of a second back in third place.

The reprimand was his first since last yearâ€™s Bahrain Grand Prix.

â€œItâ€™s always a compromise between long run and short run, set-up wise and everything,” said the German.

â€œAnd especially in these conditions. Itâ€™s very hot so very tough on the tyres, on a long run, but for sure I need to work on my one lap pace for tomorrow. Mainly it was that I worked the tyres too hard on the out lap so, starting the flying lap, they were just too hot.â€

â€œAll in all it was a good day. I have to say, for the race especially, it was looking pretty good, especially compared to Ferrari, which is important, and compared to Lewis, it was close.â€

Kimi Raikkonen, who complained of boredom during a radio conversation in the closing stages, was fourth quickest in the second Ferrari.

But Vettel believes Ferrari may struggle to match Mercedes on Saturday and Sunday.

“I think that, although the gap was around four tenths, it was a bit more if you look at the whole day,â€ said Vettel.

â€œI haven’t seen the long runs, but I guess the gap is still there. That’s the bad news for us.”

If Hamilton’s near-flawless progress looks predictable, the practice itself was punctuated by unexpected moments, most notably when the engine cover of Romain Grosjeanâ€™s Lotus car flew off after 17 minutes, signalling a red flag stoppage.

This meant Grosjean was delayed in the pits for more than half an hour for repairs â€“- a predicament shared by Daniel Ricciardo as the Australianâ€™s Red Bull was up on its stand in the team garage for 55 minutes of the session as his fourth and final penalty-free Renault power unit of the season was installed.

When he did emerge, for a 90-minute session truncated into less than five, Ricciardo climbed to 13th with his fourth lap â€“- compared to 35 registered by his former Red Bull team-mate Vettel.

That left him eight places behind his Red Bull team-mate Daniil Kvyat, who was a fine fifth after a lacklustre start to his season ahead of teenager Max Verstappen, of Toro Rosso.

Jenson Button delivered a welcome shaft of optimism to the troubled McLaren Honda team in seventh place ahead of Valtteri Bottas of Williams, Spanish local hero Carlos Sainz in the second Toro Rosso and Felipe Massa in the second Williams.

Two-time champion Fernando Alonso was 11th in the second McLaren, signalling perhaps that the teamâ€™s new gunmetal grey livery was bringing a change of fortunes after four pointless and disappointing races.