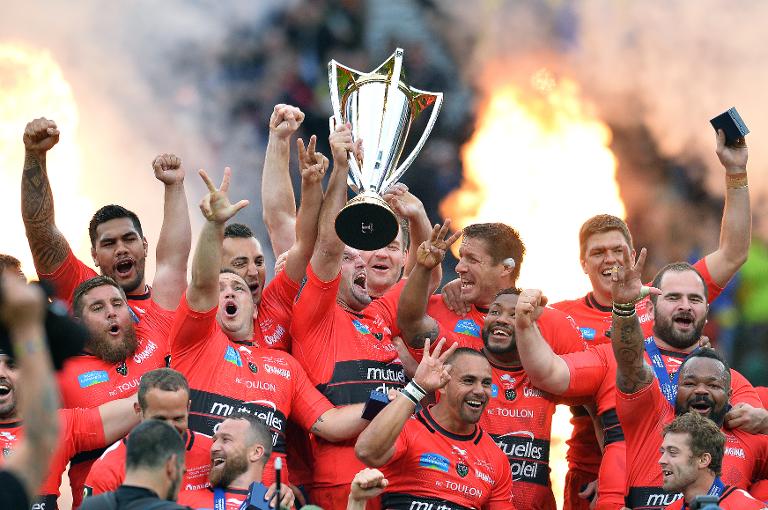 Fresh from an unprecedented third consecutive European Cup title, league leaders Toulon turn their attention back to Top 14 action this weekend, against an under-strength Castres battling for survival among France’s elite.

The star-studded Toulon side saw off French rivals Clermont 24-18 at Twickenham last week, but try-scoring centre Mathieu Bastareaud insisted the Bernard Laporte-coached club would now “restart from zero” against Castres, sitting in 12th spot on 47 points, level on points with Bayonne in 13th, the second relegation spot.

“We really celebrated the title and we resumed training nice and easy,” said the block-busting centre.

“We haven’t spoken too much of what’s coming up in the season… With our experience, we know how to manage this sort of big game and I think we’ve managed to get past thoughts of the title.”

Bastareaud added: “With the Cup victory, we started this week on a little cloud.

“So we’re feeling less fatigue and the fact we’re playing Castres quickly puts our feet back on the ground.

“Castres come with much ambition… so it’s up to us to be professional and serious for this match because we have the chance to make things easier for the end of the season. We mustn’t let it past us.”

Thoughts had not strayed to a second Cup and Top 14 double, Bastareaud insisted.

“Of course, we’re aware that a second double would be massive but we must first beat Castres before thinking about that.

“One of our goals has been achieved but there remains one. The mission is now to qualify directly for the semi-finals. We restart from zero!”

Toulon sit atop the league on 66 points, four ahead of beaten European finalists Clermont (62).

The top two sides qualify directly for the end-of-season play-off semi-finals. Teams placed third to sixth play off in two quarter-finals with the winners of each advancing to the last-four stage.

Toulouse and Stade Francais are currently pegged in third and fourth on 61 points, with Racing-Metro (58) and Oyonnax (57) fifth and sixth.

Oyonnax have a six-point lead on Montpellier in seventh and will look to consolidate their top-six spot away to Bordeaux-Begles, who have slipped to eighth (51).

With just three games left of the regular season, every match counts and Montpellier have a chance to steal a few points at home to Bayonne, while La Rochelle (ninth on 50pts) will bid for a bonus-point away victory over bottom club Lyon.

Toulouse play Brive and Clermont travel to Grenoble in the late match.

But arguably the game of the weekend comes on Sunday with the Paris derby pitching Racing-Metro at home against western city rivals Stade Francais.

Springbok fly-half Morne Steyn said his Stade team “were not at all happy after losing the last game against Toulouse”.

“It’s is never nice to lose at home, and it was not a good performance by us. But this week, it’s the Paris derby, it’s a huge game and I’m sure we are in for a fascinating match.”

Steyn, who has had to play second fiddle to France No 10 Jules Plisson for much of the season, added: “Racing are a quality side, and they will definitely be up for the game.

“Like us, they are fighting for survival in the top six.

“From now on, if you lose a game the consequences can be disastrous. Next week we play Montpellier and they are also fighting for their place in the top six.

“Every game from now on is going to be like a final.”