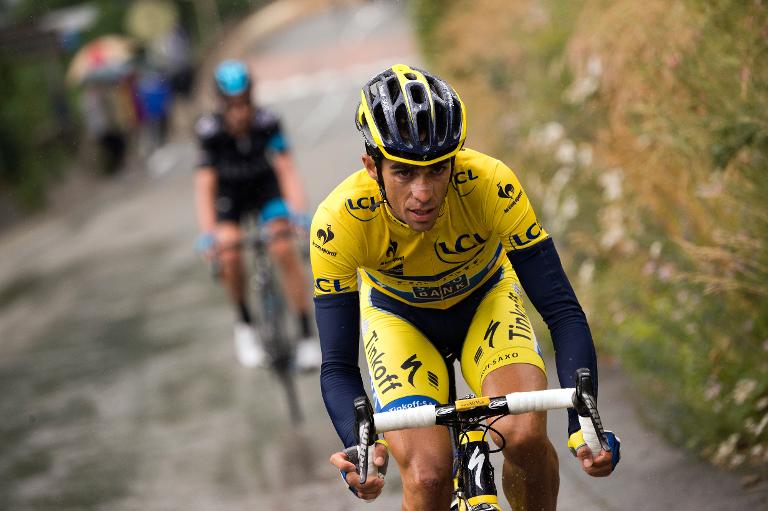 Alberto Contador will begin his bid for a Giro d’Italia-Tour de France double on Saturday aiming to keep out of the limelight for as long as possible in Italy.

The 32-year-old Spaniard, who won the Vuelta a Espana for the third time last year, is bidding to become the first person since disgraced Italian Marco Pantani in 1998 to do the Giro-Tour double in the same year.

He last attempted the feat in 2011 and although he won the Giro, he faded to fifth in the Tour two months later.

However, he was later stripped of both results when the Court of Arbitration for Sport found him guilty of ingesting the banned substance clenbuterol during the 2010 Tour de France and stripped him of all results from then onwards.

Even so, Contador will come into the race as clear favourite simply because his record in Grand Tours is so remarkable.

Of the 12 he has started, he has finished top of the pile in eight of them.

Even after taking into consideration the results he was stripped of for doping, his record still reads six victories (two Tours, one Giro and three Vueltas) from nine.

But this time around, he is mindful of saving energy to be able to reach the Tour de France in top shape.

To do so he says that he would rather not take the race lead until the final week, and even then as late as possible.

“I’d be happy with taking it on the last day. Better than having it for two weeks straight,” Contador told Spanish newspaper Marca.

“This Giro is very different to 2011, firstly because of the way I’m planning on tackling it.

“In terms of the route, there are a lot of mountains, but not so much at the ends of stages. There won’t be out-and-out mountain stages until after stage 14.”

It means Contador will likely be looking to control proceedings and keep in touch rather than taking the race by the scruff of the neck in those first two weeks.

The Spanish Tinkoff-Saxo leader said it is the mountainous stage 16 where he believes the Giro will be won and lost.

That takes in five categorised climbs including the first category Passo del Mortirolo.

“The key to the Giro will be the Mortirolo. For me it’s the key stage, with the Aprica, Tonale, Mortirolo and Aprica again,” Contador said.

He will likely face stiff competition from Italian Fabio Aru, although the Astana team leader’s preparations were disrupted as he was forced out of the Giro del Trentino due to illness.

However, he was third last year and is the big home hope — what makes the Giro for the fans and organisers is a strong Italian contender battling for victory with a foreign pretender (and hopefully winning).

Australian Richie Porte will be seen as one of the favourites, especially given his early season form that saw him win Paris-Nice, the Volta a Catalunya and the Giro del Trentino.

But there are doubts about his capacity to challenge in three-week tours after his spectacular collapse at last year’s Grand Boucle.

Even so, he is confident: “The Giro d’Italia has been my main goal of the season.

“I’ve worked very hard through the winter and am entering the race strong, healthy and up for the challenge.”

His former Sky teammate Rigoberto Uran, now with Etixx-Quick Step, will also likely be in the mix after the Colombian finished runner-up in the last two years.

And just last week a potentially new contender emerged in the shape of Russian Ilnur Zakarin after the 25-year-old stunned the likes of Chris Froome, Vincenzo Nibali and Nairo Quintana to win the Tour de Romandie.

Last year the Katusha rider was competing for the Continental Tour RusVelo team a year after it had to suspend itself from competition due to a spate of positive doping tests amongst its riders.

Zakarin himself was banned for two years from 2009 to 2011 after failing a test while still a junior.