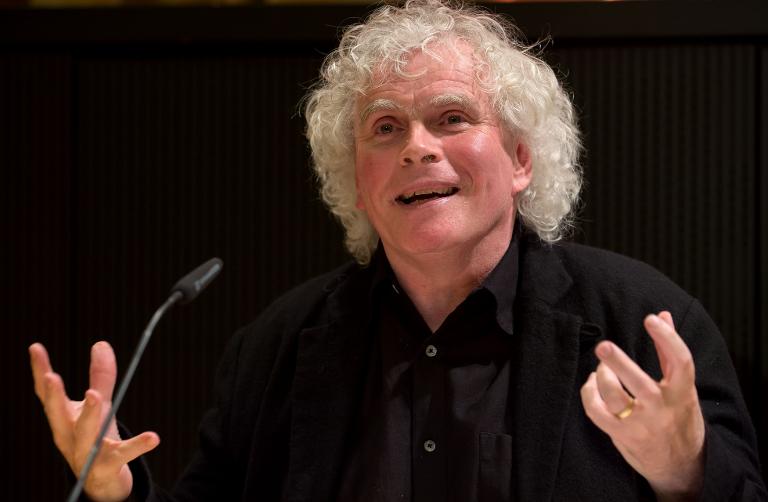 It’s a bit like the papal election, but without the white smoke. On May 11, the classical music world will learn who is to be new chief conductor of the prestigious Berlin Philharmonic.

Strictly speaking, the title is not chief conductor, but “artistic director”, a position held by Britain’s Sir Simon Rattle since 2002.

The 60-year-old Liverpudlian, with his characteristic (now white) mop of hair, is stepping down in 2018.

The Berlin Philharmonic — reputedly the best orchestra in the world — is unique in that the musicians vote for their chief conductor themselves.

Everywhere else it is boards and trustees, or sometimes politicians, who decide who will swing the baton.

But the Berlin musicians are called to vote by secret ballot, complete with paper slips and a ballot box, and are forbidden from having their mobile phones with them.

While orchestra members are sworn to absolute secrecy about the names of possible candidates, the classical music world is abuzz with a number of possible favourites.

Until recently, most observers believed it would come down to a race between Argentine-born Daniel Barenboim and Christian Thielemann from Germany, both of whom have been in the running before.

But Barenboim has announced he is not a candidate.

Since announcing his departure, Rattle has been appointed music director of the London Symphony Orchestra from 2017, the year before he quits Berlin.

He said in a recent newspaper interview that Berlin was “simultaneously the hardest and best conducting job in the world.”

With still three more years to go in the German capital, he said his time in its iconic concert hall, the Philharmonie, had been “exceptional”.

In fact, he will continue to live there with his third wife, mezzo soprano Magdalena Kozena, and their young family even when he takes up the baton in London.

Around 30 of the world’s best conductors are regularly invited to direct its concerts and it is from that pool that the new chief is likely to be chosen.

In theory, however, “every living conductor” can be seen as a potential candidate, said board members Peter Riegelbauer and Ulrich Knoerzer.

The orchestra’s 124 voting members will convene at 10:00 am on Monday for the vote.

It should normally have been held in the Philharmonie. But a special ceremonial concert is being given in the building the next day to mark 50 years of diplomatic relations between Germany and Israel, and with all the security measures that will entail, the vote will be held at another as yet undisclosed venue.

International interest will also be high.

The Berlin Philharmonic has one of the world’s most prolific recording contracts and a massive back catalogue, a reference for classical music aficionados worldwide.

It tours tirelessly and has recently pioneered the online streaming of its concerts via its ground-breaking Digital Concert Hall.

The election is likely to take a number of rounds, with a short-list of candidates compiled from the names that emerge during the first round.

More voting will then follow, whittling down the list until one candidate emerges with a “clear majority”, said the orchestra’s spokeswoman, Elisabeth Hilsdorf.

The exact number of votes cast for each candidate will be kept secret, however.

Once a candidate has been picked, a member of the voting committee will telephone them to ask if they are willing to accept the position.

Should they refuse, the orchestra will reconvene to discuss how to proceed.