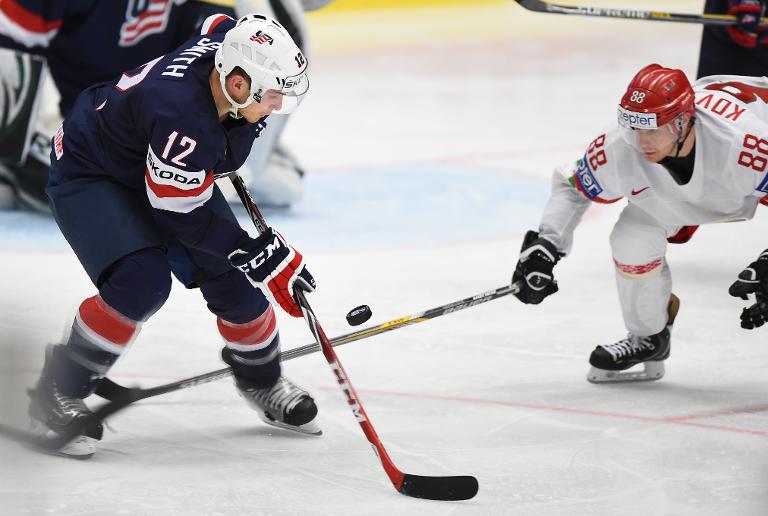 The USA lost their first points at the ice hockey world championships on Thursday after losing to underdogs Belarus 5-2 in their fourth game at the tournament.

In the eastern Czech city of Ostrava, Artur Gavrus, Artyom Volkov and Alexander Kitarov scored from breaks within five minutes of the second period to hand Belarus a 3-0 lead.

New York Islanders forward Brock Nelson scored his third goal at the tournament and his team’s first 38 minutes into the game.

But Belarus kept pushing and Alexei Kalyuzhny scored twice in the final period with Boston defenceman Torey Krug merely narrowing the difference in between Kalyuzhny’s goals.

In Group B’s other game, Nashville goalie Pekka Rinne had to stop only 13 shots by Slovenia for his third shutout from four games that handed Finland an easy 4-0 win.

Leo Komarov and Petri Kontiola scored within 40 seconds to put Finland 2-0 ahead in the 7th minute.

Florida youngster Aleksander Barkov and Joonas Kemppainen made it 4-0 in the second period.

Belarus have gone top of Group B ahead of Finland, defending champions Russia and the USA.

In Group A played in Prague, Oscar Moller scored twice and added two assists to spare Sweden’s blushes in a lacklustre win over Germany in a game whose first period was disrupted by shattered glass at the O2 Arena.

After the impromptu break, Sweden struck first with goals by Moller, who plays for AK Bars Kazan in Russia, and Toronto forward Joakim Lindstrom.

But Marcus Kink narrowed the lead still in the first period and Nicolas Krammer put Germany level half an hour into the game.

Dallas defenceman John Klingberg scored early in the final period and Moller then stunned the German defence with a spirited game winner.

German forward Matthias Plachta then merely added some drama to the game with a 55th-minute goal.

Earlier on Thursday, Czech Republic defenceman Ondrej Nemec scored twice and added an assist to lead the hosts to a smooth 5-1 win over France.

Nemec, who plays for CSKA Moscow in the Russian-based Continental Hockey League, opened the score early into the second period and center Vladimir Sobotka added another on 27 minutes before French defenceman Kevin Hecquefeuille narrowed the Czech lead.

The Czechs went on a scoring spree in the third period with Florida wing Jaromir Jagr scoring first to improve his record as the oldest player ever to score at the worlds to 43 years and 82 days.

Nemec and Roman Cervenka then rounded off the score as the Czechs outshot their rivals 46-20.

Canada lead Group A with a perfect record of four wins from four games, ahead of Sweden, Switzerland and the Czechs.

The first four teams in each group will make it to the May 14 quarterfinals, while the last ones in each group — currently Latvia and Slovenia — face relegation.