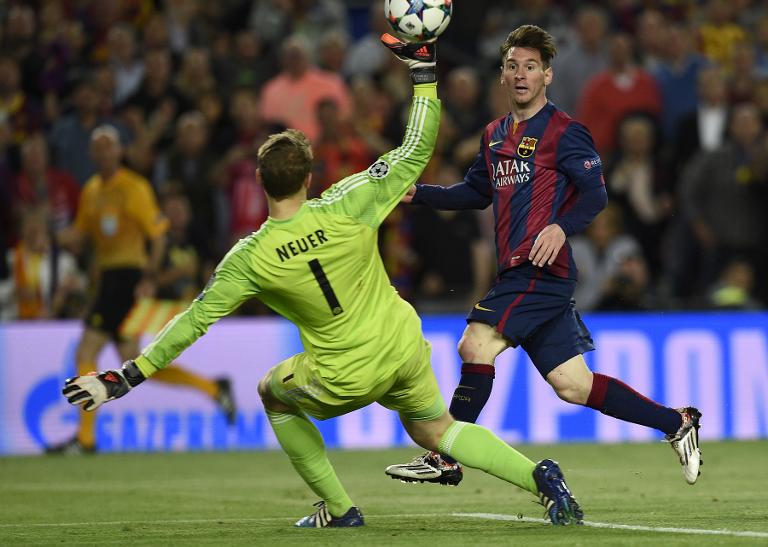 Bayern Munich boss Pep Guardiola lamented his side’s capitulation to a Lionel Messi-inspired Barcelona as the Catalans scored three times in the final 13 minutes to win the first-leg of their Champions League semi-final 3-0.

Messi turned the tie in Barca’s favour with two superb finishes in three minutes as he fired home from the edge of the area before dinking the ball over the impressive Manuel Neuer in the Bayern goal.

And he then turned provider in stoppage time by playing in Neymar to all but book Barca’s place in the final in Berlin early next month.

“After 1-0 it sapped our confidence a bit, the last goal is a shame because with 2-0 we had a chance, but 3-0 it is difficult,” said Guardiola, who was returning to the Camp Nou as the opposition coach for the first time after winning 14 trophies in four years as Barca boss between 2008 and 2012.

The result could have been even more one-sided but for an inspired performance from Neuer, but Messi was delighted to finally find a way past the German international and gain some measure of revenge for losing last year’s World Cup final against the Bayern number one.

“They have a great goalkeeper, he stopped Luis (Suarez) in a one-on-one, but it was important to score,” said Messi.

“We know how good Bayern are, they like to have the ball, they will be strong at home, but thankfully we managed to get the goals.”

Bayern have been rocked by a series of key injuries in recent months, but still sealed a 25th German title last weekend and Guardiola insisted his players couldn’t be faulted.

“I am very proud of the team, of these players. We have had problems in these two or three months and we have got to here. I cannot reproach them for anything.

“The result hurts us, Barca are in great form. I understood that the way to stop them was to have the ball, I don’t know how to do it any other way.

“We wanted to control the game, but against players of this level you can be exposed. We lacked presence up front.”

Guardiola’s former teammate and friend, Barca coach Luis Enrique, admitted his job is made a lot easier by having Messi in his side.

However, Enrique was quick to laud the Catalans’ overall display as Bayern were prevented from getting a single shot on target.

“More than what we have seen from Leo in attack, was his defensive work when we didn’t have the ball.

“Today we have played against a very good team. We were very balanced as a team and very effective.

“We created a lot more chances than the opponent and that speaks to how well the players are playing.”

Guardiola had described Messi as “unstoppable” in his pre-match press conference and Barca defender Gerard Pique agreed that his former boss knows as well as anyone the havoc that the four-time World Player of the Year can reek on this sort of form.

“Guardiola knows Messi well and knows that if he is inspired no one can stop him. He scored two fantastic goals,” said Pique.

“We played a sensational match. Defensively we were very good because that a team like Bayern doesn’t have a shot on target is sensational. Then we took our chances up front and did a lot of damage on the counter-attack.”

Bayern came from 3-1 down in the quarter-finals against Porto with a stunning 6-1 second-leg victory at home, but forward Thomas Mueller admitted doing so against Barca is a different story.

“It’s not easy to play here, but it didn’t feel like the game was heading that way (3-0) on the pitch.

“We’re FC Bayern, we’ll keep our heads up, you can’t expect another Porto result, but we’ll give our all until the final whistle in Munich.

“We’re far from happy with the result, but what we need to do now as a team is stand united and not play the blame game.