Home Sports Sunrisers down Rajasthan Royals to remain in hunt 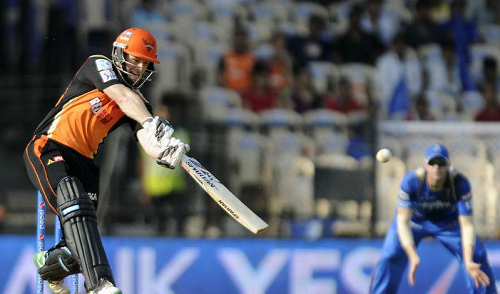 Mumbai: SunRisers Hyderabad kept their play-off hopes alive by pulling off a well-deserved seven-run victory over Rajasthan Royals in a rousing IPL cricket contest that went to the wire at the Brabourne Stadium in Mumbai on Thursday.

Chasing the formidable target, Royals lost in-form batsman Ajinkya Rahane (8) cheaply but a superb innings of 68 from Steve Smith brought them back in contention. And then a late-order flourish from James Faulkner (30), Sanju Samson (21) and Chris Morris (34 not out) brought the hosts in touching distance of victory, which was not to be.

Morris threatened to take the game away with a flurry of three sixes in the 19th over bowled by Praveen Kumar (0-40) before Bhuvaneshwar Kumar (3-44) stopped Royals short in the last over, in which they needed 18 runs.

This was SunRisers’ fifth victory in 10 games, which took them to ten points and kept their hopes alive while Royals’ suffering their fourth loss in 12 games and have not yet booked their final-four berth.

Put in to bat, SunRisers were off to a fine start with Dhawan and captain David Warner (24) stitching together a 48-run stand.

It got broken in the fifth over when Warner edged his compatriot and opposite number Shane Watson (2-36) to wicket-keeper Sanju Samson.

Another useful partnership of 41 followed between Dhawan, who made his third half century of the competition and second against SunRisers, and No.3 Moises Henriques (20).

It was nipped by leg spinner Pravin Tambe (1-32), who clean up the Australian all-rounder while he attempted a big heave.

Morgan hit Watson for a huge six before Dhawan slog-swept off-spinner Deepak Hooda (0-34) over the ropes to raise his 50 in 33 balls, while the team total swelled by 14 runs in that over.

But he attempted an ambitious reverse sweep off James Faulkner (1-37) soon afterwards and was castled after adding 38 runs with Morgan.

Irish-born Morgan was joined by Ravi Bopara and went on the offensive in the last five overs during which the score rattled along.

Morgan singled out Tambe, whose first three overs cost only 14 runs by carting the leg spinner for two sixes, a four and a couple in his last over. He lofted Faulkner for a straight six to reach 50 off 23 balls, a knock laced with four sixes and as many fours.

When Watson came on to bowl towards the end, Morgan made the ball soar over long on for his fifth six but then holed out to long off in the same over to bring to an end the fourth-wicket partnership with Bopara worth 53 in 20 balls.

Thanks to Morgan, the visiting team was able to muster 68 runs in the last five overs and post their first plus-200 total of the tournament and fifth overall, in which Royal Challengers Bangalore have two to their credit.

Chasing the imposing score, Royals were pegged back when the tournament’s leading run getter Rahane departed for 8 off the sixth ball by edging Bhuvaneshwar to keeper Naman Ojha.

Eight for one turned to 30 for 2 when Watson drove Ishant Sharma, playing in only his second game of the season, and put up a tame catch to mid on.

Karun Nair, who came in at no. 4 behind Smith, could not replicate the way he had batted when scoring a half century against Delhi at this ground four days ago and chased an out-swinger to be caught behind off Henriques that left Royals a mountain to climb at 45 for 3 in the 8th over.

Smith was lucky when on 14 as his high flick towards deep square leg off Praveen Kumar could not be grabbed by Henriques despite a diving effort.

The Australian batsman, who was in superb form in his own country earlier this season, then showed his class as he cover-drove and pulled Henriques for three boundaries. At the other end Deepak Hooda got out for 7 when going for a wild slog off Karn Sharma to bring in big-hitting Faulkner with Smith at 77.

Faulkner was served two juicy full-tosses by Ishant and dispatched both over the boundary ropes before Smith smote spinner Sharma for two straight-field sixes by dancing down the pitch – the first also enabling him to cross the half century mark in 32 balls. It was his second 50 of the season after his knock of 79 not out against Mumbai Indians at Ahmedabad on April 14.

Bopara struck a timely blow to stop Smith from running away with the game ? clean bowling the batsman on an attempted cut shot after having been pulled for fours in two previous deliveries in the 15th over at the end of which Royals were 126 for 5 ? requiring 76 runs in the last five overs for victory.

Despite some later order hitting by Faulkner, Samson and most importantly by Morris, who brought down the target drastically in the penultimate over, but Royals fell short in the end.