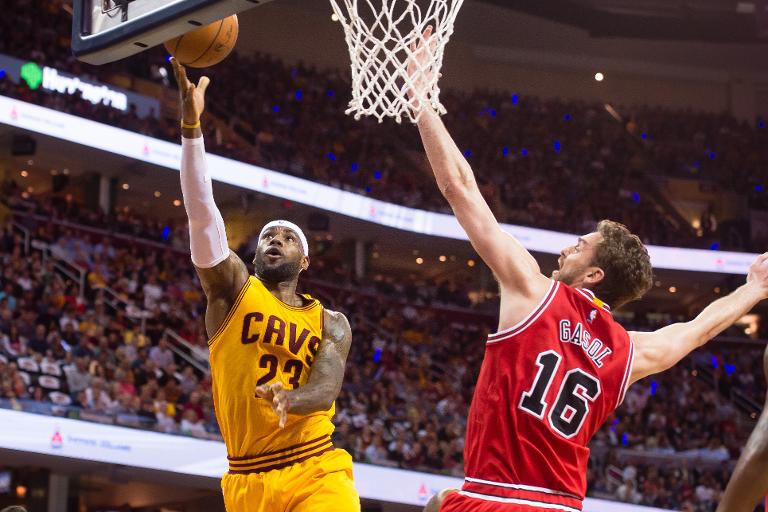 Cleveland superstar LeBron James scored 33 points to lead the Cavaliers to a 106-91 victory over Chicago that knotted their NBA playoff series at one game apiece.

After connecting on just nine of 22 shots in Monday’s 99-92 game-one defeat, James came out hot against the Bulls.

He scored 22 points in the first half as the Cavs bounced back to even the best-of-seven Eastern Conference second-round series before it shifts to Chicago for the next two games.

In the Western Conference, the Houston Rockets also bounced back from a game-one defeat on their home floor, downing the Los Angeles Clippers 115-109 to level their series at one game apiece.

James Harden scored 32 points and Dwight Howard added 24 with 16 rebounds for the Rockets, whose 64 attempts from the free throw line were two shy of an NBA playoff record.

After knocking off Dallas in the first round in convincing style and having five days off, Houston had come out flat in the second-round series opener on Monday.

Game two was up for grabs until the waning moments.

Los Angeles star Blake Griffin followed up his game one triple-double with 34 points and 15 rebounds, but the free throw discrepancy was too much for the Clippers to overcome.

The Rockets finished 42-for-64 from the line, led by Harden’s perfect 15-for-15, battling back from a nine-point halftime deficit.

“We had to lock in,” Harden said. “We just started playing much harder than them.”

In Cleveland, the Cavaliers controlled play except for a two-minute span in the third quarter when the Bulls scored 14 straight points.

James — who donned his trademark headband for the first time in almost two months — added eight rebounds, five assists and two steals for the hosts.

He also played a different position than in game one, shifting to small forward with Tristan Thompson inserted into the starting lineup.

“I think the important thing was he was very aggressive, in attack mode, engaged, leading the guys by example and vocally,” said Cavaliers coach David Blatt.

Kyrie Irving added 21 points for Cleveland, who are without big man Kevin Love for the series because of a shoulder injury.

The Cavaliers had a 25-point lead before Chicago scored on six straight possessions for their 14-0 run in the third quarter, trimming Cleveland’s lead.

James ended the run with a layup and Cleveland stretched their lead to 16 points entering the fourth quarter.

“I just thought we came out a lot more ready,” Blatt said. “We had to be engaged and have a good defensive mindset. We had to set that tone.”