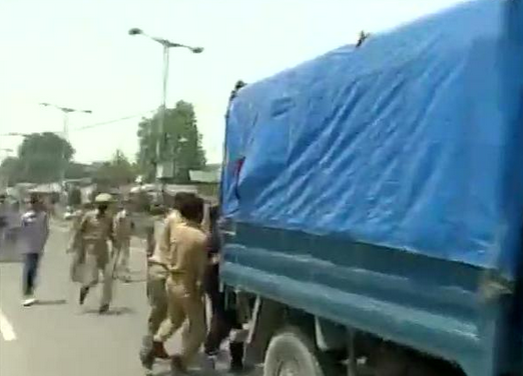 Srinagar: A protest in Srinagar by contractual government employees, demanding regularization of their services, turned violent on Thursday after the police resorted to heavy tear gas shelling and used batons to stop the protestors who were trying to march towards the Civil Secretariat.

Hundreds of government employees, who are on contract, had gathered at Pratap Park in Srinagar’s Lal Chowk area to press for their demands including release of pending arrears of the sixth pay commission.

“Employees working as daily wagers since 1994 have not been regulriased so far- though we have been promised that we will be regularized in one year’s time”, said Sajad Ahmad Parray President of Jammu Kashmir Daily Wagers Forum.

The police swung into action after several hundred employees gathered at in the heart of the city and started marching towards the nearby Civil Secretariat this afternoon.

The call for Thursday’s protest was given by Jammu and Kashmir Daily Wagers Forum to press for their demands including release of arrears and regularisation of adhoc employees.

The forum had announced “secretariat gherao” and threatened to intensify the agitation if the demands of the employees were not met forthwith.

Earlier too similar protests have been taken out by the government employees. Representatives from various government departments say that despite repeated assurances, the government has done nothing to fulfill their promises.