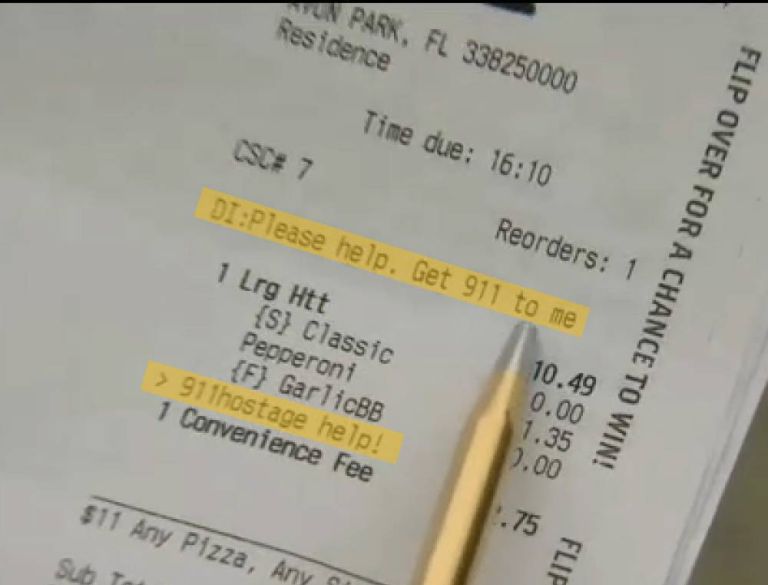 Who said pizza is bad for health? Sometimes, it can be a plain jane life saver. Confused?

A woman in central Florida saved herself and her children by ordering pizza. Only, she added a small note to the order, asking the employees to call 911 because she was being held hostage. Cheryl Treadwayâ€™s presence of mind certainly prevented something unfortunate.

The Pizza Hut employees spotted what she wrote in the comment section of her online order. Employees recognized Treadway as a regular customer and called the sheriff’s office.

Highlands County Sheriff’s deputies went to the home, where Treadway, who was carrying a small child, opened the door. She told them that her boyfriend, Ethan Nickerson, 26, was inside the home, armed with a knife. Her other two children were also inside.

Treadway and the child were escorted to safety.

It seems that Lt. Curtis Ludden started talking to Nickerson through a closed door. It took about 20 minutes for Ludden to talk Nickerson into coming out peacefully. The children were not harmed.

According to an arrest report, the couple had been arguing throughout the day, as Nickerson carried a knife. When Treadway started to leave to pick up her children from school, Nickerson grabbed her and took her phone away. He went with her to the school.

She coaxed Nickerson into letting her use her phone to order a pizza. But immediately after sending the request, Nickerson took the phone back.

Nickerson was arrested and now faces multiple charges including aggravated assault with a weapon without intent to kill, battery and false imprisonment. The cry for help was also a first for Pizza Hut manager Candy Hamilton.

“We’ve never seen that before,” Hamilton said. “I’ve been here 28 years and never, never seen nothing like that come through.”