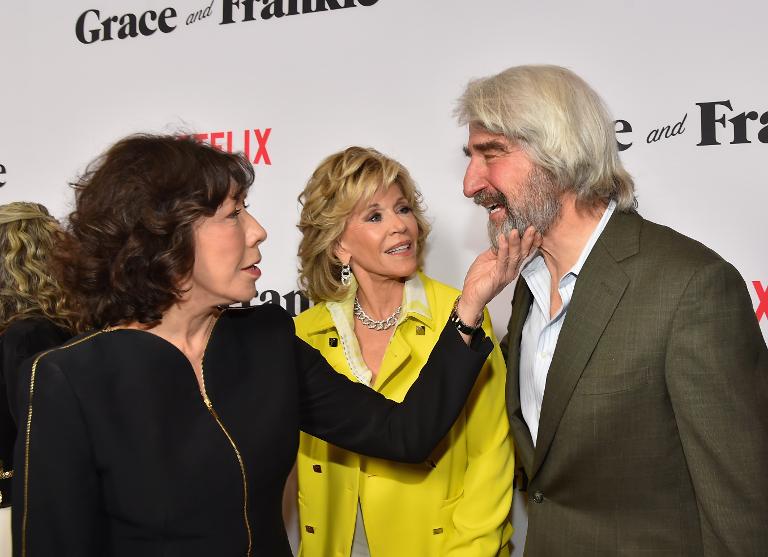 Streaming giant Netflix is unashamedly targeting older viewers with its latest original series, “Grace and Frankie,” a comedy about two retired ladies thrown together when their husbands come out as gay and a couple.

Veteran Jane Fonda, 77, said she jumped at the chance to play “Grace” alongside her friend Lily Tomlin in the show, which debuts all 13 episodes on Friday.

The premise of the series is unveiled with both sat in an elegant restaurant with their husbands, enjoying what they expect to be a pleasant dinner between two couples.

But when they get to dessert, Robert and Sol — played by Martin Sheen and Sam Waterston — throw the bombshell by revealing that they have loved each other in secret for 20 years and want to spend the rest of their lives together.

The older demographic follows a trend of TV shows opening up to new family models, a trail blazed for example by award-winning comedy “Modern Family”; “Orange is the New Black” (also from Netflix); and Amazon’s “Transparent,” about a transgender older man.

Fonda says older women have been relatively ignored on TV. “Nobody is addressing them, that’s what’s unusual about the series,” she told reporters at a pre-launch presentation in Los Angeles.

“It’s raising issues that aren’t being raised out there,” she said of the show, created by producer Marta Kauffman, who brought the world the megahit “Friends.”

After the emotional bombshell, Grace and Frankie agree that supporting each other is the best way to move forward and regain control of their lives, after years of depending on their husbands.

“A lot of women have no idea how important friendships are to them,” said Tomlin, 75, who was nominated for an Academy Award in 1976 for “Nashville.”

“The fact is that women, much more than men, can have extremely intense, profound relationships. The older you get, the more you realize it,” added Fonda.

Through playing two totally opposite characters — Grace dependent on what others think, while Frankie follows her feelings — the complicity between the actresses is key to the plot.

Fonda and Tomlin have been friends since 1980, when they acted together alongside Dolly Parton in the comedy “Nine to Five.”

Their fight against domestic violence and their love for nature and animals has united them over the years, as well as their feminism, which infuses the show.

Their characters reiterate a message which they try to embody in their day-to-day lives.

“One of the things of feminism is that we shouldn’t give up who we are, or feel that in order to be OK in life we have to be attached to a certain kind of man,” said Fonda, citing the example of her own 15 years of professional inactivity during her marriage to media magnate Ted Turner, founder of CNN.

“You can be committed to a marriage or to a person, but you have to have enough of your own freedom that you can step away and save yourself,” added Tomlin.