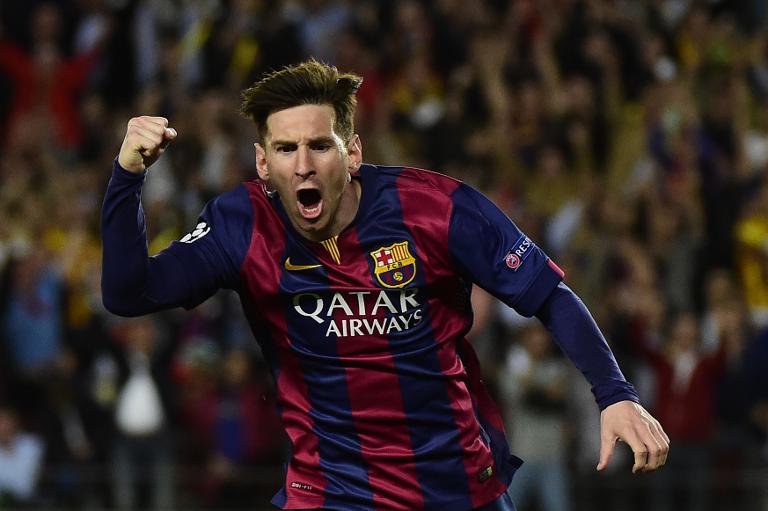 The first leg of Champions League semi-final between Barcelona and Bayern Munich was a reminder of how lucky we all are to live in the era of Lionel Messi.Â

For 77 minutes on Wednesday night, this was one of the great emotional struggles and tactical battles in European football history as both sides pushed and probed and looked to find an advantage. But then, in just four minutes, Lionel Messi showed how individual genius can just trump everything else.

On his 100th appearance in European football, Messi’s double moved him back ahead of Cristiano Ronaldo as the all-time leading scorer with 77 in the Champions League and Barca to the brink of their first final in four years.

But this was about more than the statistics. Here was a player who returned to the very peak of his powers, stepped up on the biggest occasion and decided the game on his own. In the first half he showed signs of the mood he was in during Manchester City’s visit in the round of 16, using quickness of foot to escape three markers near halfway. Messi’s magic was not so decisive that night; here, against his old manager, his best work earned Barca a huge prize.

Manuel Neuer had kept Bayern in the game with a string of fine saves, but was helpless as Messi drilled home the opener from the edge of the area in the 77th minute and then delightfully chipped the German three minutes later.

Messi then fed Neymar in stoppage time to roll past Neuer and hand Bayern an almost impossible task in next week’s second-leg.

“The result is a bit harsh. We wanted to control and play our own game,” said Bayern boss Guardiola, a former Barca coach.

“Against Barca you can defend deep or play to control. Our control in the first-half worked pretty well, especially in the final 15 minutes.

“It is a perfect result,” said Barca boss Luis Enrique.

“It brings us closer to a possible final, but we have to confirm it in the second-leg, which will without doubt be a hard game.

“I am very satisfied with how we played and the result against such a strong team. We had a lot of chances and they had very few.”

Guardiola is Barca’s most successful ever coach having won 14 trophies in four years between 2008 and 2012 and was given a warm reception by the home fans as he took his seat for the first time in the away dugout.

However, his early tactical plan to play three at the back nearly proved costly.

Bayern’s intense pressing was forcing Barca to play long more than they are accustomed to, but it nearly worked to perfection when Messi’s headed flick-on sent Luis Suarez clear behind the Bayern defence after 12 minutes.

Neuer, though, stood up brilliantly to divert the Uruguayan’s effort to safety with an outstretched right leg.

Suarez turned provider for the next opening as his low cross picked out Neymar only for his goalbound effort to strike Rafinha and deflect behind.

The visitors then had a huge chance of their own as Thomas Mueller picked out the unmarked Robert Lewandowski, but the Polish international — who was playing with a protective facemask after suffering a broken nose and cheekbone just last week — sliced his effort wide.

Neuer came to Bayern’s rescue again six minutes before the break, spreading himself to deny Dani Alves as he latched onto Andres Iniesta’s through ball.

Bayern started the second period the brighter, but it was once again Neuer who was the busiest goalkeeper as he handled a driven shot with Messi after a neat one-two with Neymar.

The two combined once more moments later but Neymar just couldn’t bring Messi’s lofted pass under control and Neuer galloped from his line to clear the danger.

However, Messi was not so forgiving when offered room on the edge of the area for the first time as he fired past Neuer at his near post 13 minutes from time.

Three minutes later he produced an even more sublime finish as the Argentine received Alves’s pass and left Jerome Boateng stumbling to the ground before dinking the ball over the advancing Neuer on his weaker right foot.

Suarez should have made it 3-0 moments later when he raced onto Neymar’s through ball but blazed wildly over.

Yet, Neymar was cooler when bearing down on Neuer in stoppage time from Messi’s pass as this time he found the back of the net and all but secured Barca’s passage to the final in Berlin early next month.

Is this Champions League semifinal over? Technically, it is not. Neymarâ€™s late goal completed Barcelonaâ€™s 3-0 victory and gave it a mountainous lead in the two-game aggregate series, but Bayern has enough talent to hold on to at least a sliver of hope ahead of next Tuesdayâ€™s return at Allianz Arena.

The other semi-final first leg played on Tuesday saw Juventus claim a 2-1 lead over Real Madrid.