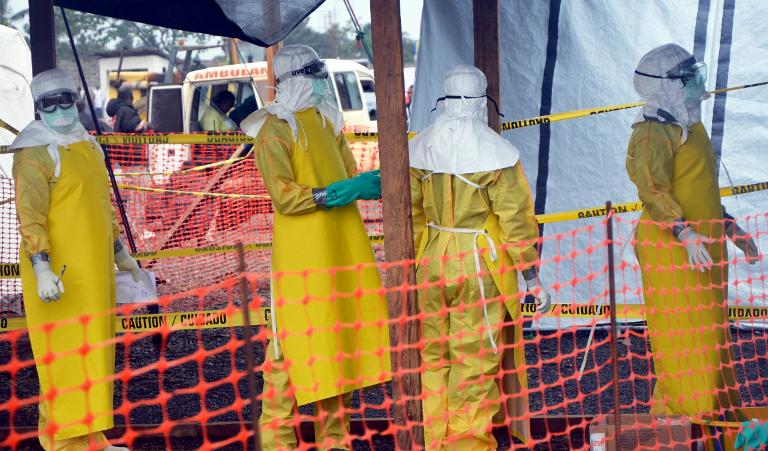 Heavily pregnant when she died, Fatimah Jakemah was bagged, bleached and carted off for cremation, one of dozens of new cases in the capital that week as Ebola tightened its grip on Liberia.

It was early September and the outbreak was about to mushroom into an emergency of historic proportions that would eventually see 4,700 deaths throughout the country.

Across town, Olivia Clark found herself handing another collection team her 18-month-old son, Aaron, who had slipped away a few hours earlier, too young to fight the deadly virus amplifying inside his tiny body.

Amid the horror, one case stood out as uniquely cruel.

In the quarantined hamlet of Ballajah, 150 kilometres (90 miles) away, 12-year-old Fatu Sherrif was locked into her home with her dead mother as panicked neighbours fled to the forest.

Her cries could be heard for several days by the few who had stayed in the abandoned village before she died alone, without food or water.

By October the situation was so bad that besieged Red Cross disposal teams had given up trying to separate Ebola victims from those who might have met other ends, following a government directive to “burn them all”.

As Ebola set out on its murderous path through Liberia and its neighbours Guinea and Sierra Leone, credible medical experts were predicting worst case scenarios of more than a million cases and tens of thousands dead.

Yet treatment units are now lying empty and life is returning to normal as Liberians emerge from the nightmare which enveloped them in the summer and autumn of 2014.

If there are no new infections in the next 48 hours, the World Health Organization (WHO) will declare Liberia “Ebola-free” on Saturday, 42 days — or twice the incubation period of the virus — after the last case.

At the height of the crisis in late September it was seeing more than 400 new cases a week, with uncollected and highly infectious bodies piling up in the streets of Monrovia, a sprawling, chaotic city at the best of times.

The health system — embryonic before the crisis, with some 50 doctors and 1,000 nurses for 4.3 million people — was devastated, losing 189 health workers out of 275 infected.

And then, as suddenly as it had crept in, Ebola retreated.

Liberia, which had recorded 389 deaths one week in October, found the tally dropping below 100 within weeks and into single figures by the start of 2015.

The last person to die was Ruth Tugbah, a 44-year old fruit seller who contracted the virus in mid-March, probably through having sex with her boyfriend, an Ebola survivor.

In the coming years there will be a reckoning on the response to the greatest ever Ebola outbreak, which has left 11,000 dead and is still simmering in Guinea and Sierra Leone.

The West was accused of ignoring the crisis early on and then treating Liberia and its neighbours as pariahs, blocking flights and quarantining returning health workers after the first-ever domestic infections outside of Africa, in the US and Spain.

The WHO, at times seen as overly bureaucratic and politicised, was berated for waiting until August — almost five months after the outbreak was identified — to declare it a “public health emergency of international concern”.

With the outbreak nearing its peak and facing criticism over US inertia, President Barack Obama ordered the largest ever US deployment to the region in September, sending 2,800 troops to build 11 Ebola treatment units across Liberia.

Critics pointed out that cases had already begun to fall before they were set up and most remained empty.

The US Agency for International Development (USAID) has pointed out, however, that the military activity was just a small proportion of the full American response which included — among numerous projects — funding 10,000 civilian responders and 70 safe burial teams.

An official told AFP that clinics it funded had treated 943 patients, 190 of whom had Ebola.

In any case, David Nabarro, the UN’s special envoy on Ebola, argues that the appearance of the Americans and their military clinics gave people hope.

“I watched in September and October as the arrival of the Americans in Liberia completely transformed the morale of people and the government and, I believe, contributed to a much more widespread change in behaviour than any of us imagined would be possible,” he told reporters this week in Dakar.

“Virtually the whole country in the space of a couple of weeks in the beginning of October adopted different ways of living and reduced their risk of infection.”

When — if — the WHO declares Liberia “Ebola-free” on Saturday there will be no bunting, no ticker tape parades, just the repeated reminder on the airwaves to guard against complacency.

Liberia will remain alert to two threats — the possibility that someone with Ebola might get into the country under the radar, and that “small flare-ups” seen in other outbreaks are a possibility over the coming months.

“My colleagues in Liberia told me that they expect to be keeping extensive surveillance and practising precautions for probably as long as one year,” Nabarro said.