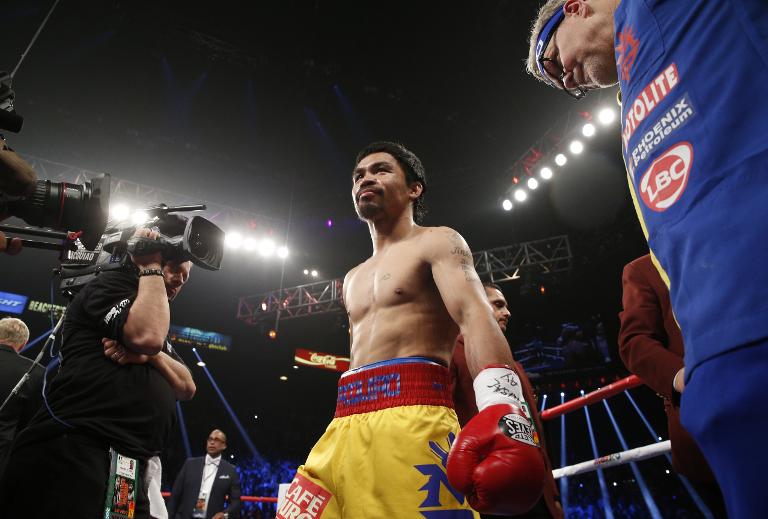 More disgruntled fight fans are going to court with their complaints, suing Filipino ring icon Manny Pacquiao and others for failing to disclose a shoulder injury prior to his “Fight of the Century” against Floyd Mayweather.

A class-action suit filed in US District Court in Illinois not only names Pacquiao and promoters Top Rank but also telecasters HBO and Showtime, who combined to produce the pay-per-view fight program that was sold in the United States for about $100.

The suit also names Mayweather, Mayweather Promotions and cable television providers AT&T, COMCAST and DirecTV, and accuses the defendants of deceptive practices in marketing and advertising the bout.

“Defendants, individually and collectively, deceptively and fraudulently promoted, produced and sold the fight as one between two healthy fighters… expressly misrepresenting the health of Manny Pacquiao to the Nevada State Athletic Commission, all in an effort to maximize and collect pay-per-view revenue,” the lawsuit claims.

At least five such class-action suits have been filed across the United States, seeking millions of dollars in compensation on behalf of those who bought tickets, forked out pay-per-view fees or bet on Saturday’s fight in Las Vegas, which Mayweather won easily on points.

Pacquiao revealed afterwards that he had been held back by the shoulder complaint.

It did not take long for the lawsuits to come flooding in.

In a similar suit filed in California, plaintiff Howard B. Sirota cites former heavyweight world Champion Mike Tyson as calling the long-anticipated bout the “Dud of the Century.”

Some of the lawsuits point to the pre-fight medical questionnaire signed by Pacquiao for Nevada boxing authorities in which he checked “no” to the question, “Have you had any injury to your shoulders, elbows or hands that needed evaluation or examination?”

Pacquiao adviser Michael Koncz, named as a defendant in some of the lawsuits, has said he inadvertently ticked the wrong box.

Daniel Petrocelli, an attorney for Pacquiao and Top Rank, told The Los Angeles Times that he was confident the Nevada lawsuit would be dismissed.

They say they disclosed the injury suffered in training camp when they cleared the use of anti-inflammatory drugs with the US Anti-Doping Agency and that Pacquiao had improved enough to be cleared by doctors to fight.

Mayweather earned an emphatic, unanimous 12-round decision over Pacquiao in the feverishly anticipated bout that will go down as the richest in boxing history — and by critics as one of the most overhyped.

Mayweather walked out of the MGM Grand Garden Arena with a check for $100 million — just the first installment of a payday that could reach $200 million when all the pay-per-view sales, ticket sales, closed circuit TV viewings and other revenue is totted up and shared out.

Pacquiao is expected to receive more than $100 million.