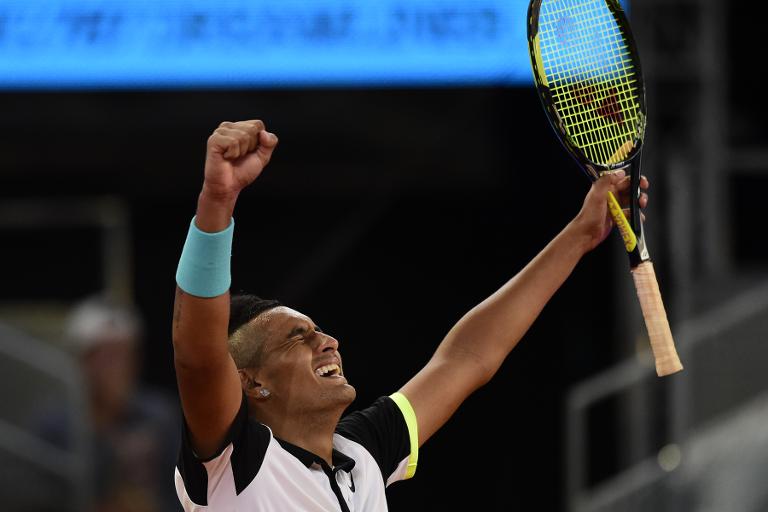 Kyrgios, who beat Rafael Nadal at Wimbledon last year, sent down 22 aces to Federer’s 15 and next faces John Isner of the United States.

“I’ve been playing well recently on the clay, so I knew I had a good chance to go out there and do well. I stuck to my game and served well and I got the win,” said Kyrgios who was runner-up on clay at Estoril last weekend.

“I guess that’s why you play the game, to play on these big courts against these big players. He’s the greatest of allâ€‘time, no doubt.”

Top seed Federer saved five match points in the deciding tiebreaker while having two of his own annulled by the big-hitting Australian youngster, ranked 35th.

“I couldn’t return his first serve, I had a horrible performance on return of serve,” said Federer. “That made life difficult for me.

“I’m disappointed with how I played on returns, and that cost me the match.”

Meanwhile, second seeded Andy Murray went through, beating Germany’s Philipp Kohlschreiber 6-4, 3-6, 6-0 in a second round tie which finished at just after 3am Thursday.

Murray, who had defeated Kohlschreiber in the rain-delayed Munich final on Monday in another three-setter to claim his first claycourt title, next faces Spain’s Marcel Granollers.

Nadal returned to his claycourt comfort zone, starting his campaign for a fifth Madrid Open title with a 6-4, 6-3 defeat of Steve Johnson.

The victory in 74 minutes lifted Nadal’s clay record over Americans to a perfect 10-0 while the third seed improved to 12-3 on the surface this season.

The nine-time French Open champion has four Madrid titles and has played in six finals at his showcase home event.

He is aiming to extend his streak of winning at least one European ATP clay title leading into Roland Garros to 11 straight years.

Nadal goes on to face Italy’s Simone Bolelli for a quarter-final spot.

“I think I played a solid match, I played the way I needed to to win that match. I know after a loss like Barcelona (third round) things are not easy when you’re playing the next match,” said Nadal.

Williams saved three match points and needed two and three-quarter hours to take her undefeated record this season to 23-0, making the most of a late serving collapse from former number one Victoria Azarenka.

Third seed Sharapova went two and a half hours before seeing off Frenchwoman Caroline Garcia 6-2, 4-6, 7-5.

Sharapova started 2015 by winning 17 of her first 18 matches, but came to Madrid having lost three in a row.

She has now won 57 of her last 62 matches on clay as she waits to play fifth seed Caroline Wozniacki in the quarters. Wozniacki advanced over Poland’s Agnieszka Radwanska 6-3, 6-2.

Nadal was joined in the men’s third round by Japanese fourth seed Kei Nishikori who saw off Belgium’s David Goffin 6-2, 4-6, 6-4. Nishikori will face Spain’s Roberto Bautista Agut for a quarter-final spot.