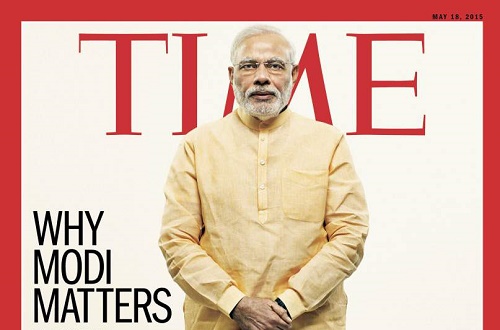 Much of it is to do with having a good set of advisors from National security advisor Ajit Doval to Foreign Secretary S. Jaishankar to an astute Mishra duo Nriprendra and PK in the prime minister’s office. However the large credit also goes to the Prime Minister who is quick to grab the public diplomacy initiatives. So after Barack Obama wrote a complementing article on him in the TIME magazine, now he features on the cover of the Asian edition of the magazine with a tell-all interview.

Here are some excerpts from that piece.

Modi compared his 10-month-old government to the United Progressive Alliance’s decade-long rule. “The whole world is again excited and enthusiastic about India and the opportunities that India represents,” he said. “Whether it is the IMF, the World Bank, Moodyâ€™s or other credit agencies, they are all saying in one voice that India has a great economic future.”

Modi told TIME, “So far as the government is concerned, there is only one holy book, which is the constitution of India.” Claiming that unity and integrity of the country was his topmost priorities, he said that all religions and communities had the same rights and that it was his responsibility “to ensure their complete and total protection.” He said his government would not tolerate discrimination on the grounds of caste, creed, and religion.

He declared that his government views all religions at par and won’t tolerate any discrimination.

The prime minister said his and the BJP’s philosophy was “Sabka saath, sabka vikas – Together with all, progress for all.”

On India’s Relations With China

Referring to nearly three decade of peace “by and large” on the India-China border, Modi said that not a single bullet has been fired there for over 25 years. “Both countries are showing great maturity and a commitment to economic cooperation,” he said. “We cooperate with China at the international stage, but we compete with China when it comes to commerce and trade.â€

Hitting out at all terrorist groups in the world, Modi said that details like names and geographic location of terrorist groups did not matter, as they would “keep changing.” He called for the passage of U.N.â€™s Comprehensive Convention on International Terrorism, so that a central definition of terrorism was followed worldwide.

“We need to delink terrorism from religion â€” to isolate terrorists who use this interchange of arguments between terrorism and religionâ€¦.We should see it as something that is a fight for human values,” he said.

The controversy surrounding the ban on India’s Daughter

The ban on Leslie Udwin’s documentary India’s Daughter caused much outrage across the nation, with activists saying the government was trying to stifle voices. When asked about the issue of freedom of speech Modi was of the opinion that India was committed to freedom of speech and as far as the documentary was concerned, the matter was sub judice and the victim’s identity was compromised.Â “In so far as freedom of speech is concerned, as I mentioned earlier, there is absolutely no issue,”Â theÂ Prime Minister told Time Magazine.