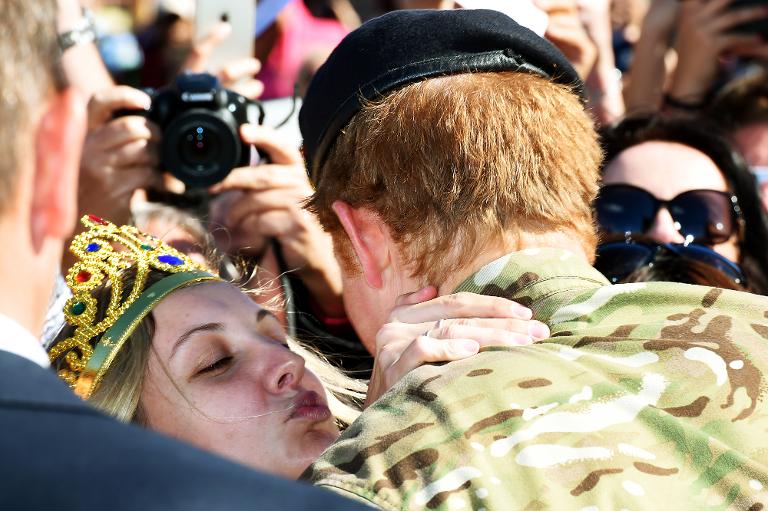 Prince Harry admitted Thursday it will be hard to leave Australia after greeting thousands of well-wishers near Sydney’s Opera House, with “His Royal Hotness” banners out in force and one woman asking him to marry her.

The 30-year-old prince, known as Captain Wales, has been on a month-long embed with the Australian army as he prepares to quit the British forces in June, missing the birth of his niece Princess Charlotte earlier this month.

The birth bumped him down to fifth in line to the throne, but he was all smiles on the glorious Sydney day, bidding farewell to Australia as his deployment Down Under comes to a close.

“I’m looking forward to meeting her — she’s beautiful,” he said in a rare royal press conference when asked about the new addition to the family of his brother Prince William and wife Kate.

The casual prince, in army fatigues and a black beret, spent more than 30 minutes chatting, shaking hands and posing for pictures along with New South Wales Premier Mike Baird after arriving at the Opera House by boat.

Harry said he had been overwhelmed by his welcome in Australia and considered himself “incredibly fortunate” to have been deployed to the vast country.

“They have made me feel so at home here. It’s going to be hard to leave — I want to stay,” said the prince.

Before his walkabout, Captain Wales met a school group, laughing and joking, with one lucky teacher getting a hug.

In the crowd hoping to speak with him was Victoria McRae, 21, wearing a Union Jack mini-dress and a crown on her head with a “Marry Me Last Chance! Prince Harry” sign.

“This is third time lucky, after this I might have to throw in the towel,” she said ahead of the visit, having tried to get his attention at royal events twice before.

It turned out to be McRae’s lucky day with the prince stopping to chat and getting a kiss on the cheek.

Asked what he said when she proposed to him, McRae said: “I said how about it and he said could he think about it and then bit his knuckles.

Another fan, Anne Woods, gave him a stuffed koala to share with his new niece.

“It was just lovely, just lovely to give him a gift for all the charity work (the prince does),” Woods said.

With his deployment ending this weekend, the prince met with a British officer being fitted with prosthetic legs in a new procedure that could allow him to jog again.

During his time Down Under, Harry trained in the country’s arid north in bush survival skills, including how to source food and water. He also spent time flying helicopters and with SAS commandos.

“All it’s done has made me not want to finish my military career to be honest with you,” he said. “It has been fantastic. I have been so well looked after.”

While largely incognito over the past month, he was spotted popping into a Vietnamese cafe for a pork roll in Sydney and a takeaway in Perth where he ordered a Queen Victoria Burger.

Harry earned a reputation as a wild-child in his early 20s with his party-going high jinks, but has since tried to carve out a more mature role for himself, with his devotion to military service playing a major part.

He leaves for New Zealand on Saturday where he will remain until May 16.