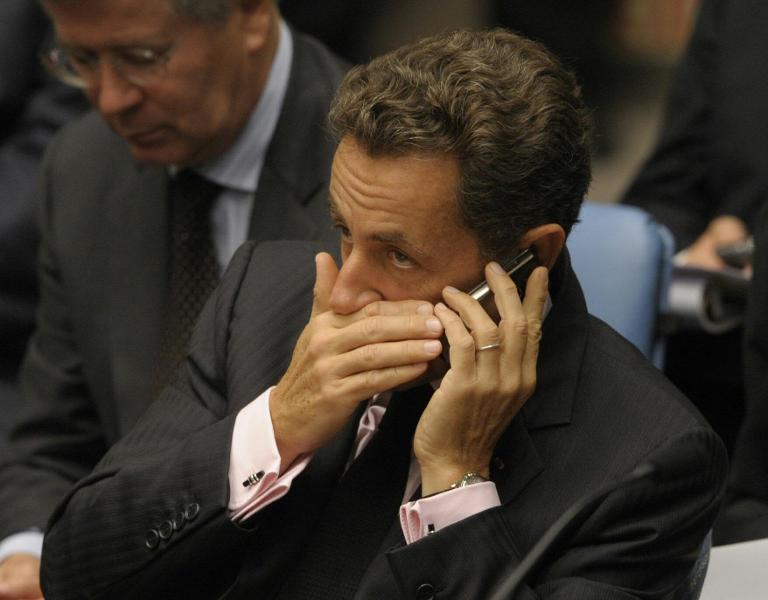 A French court ruled Thursday that wiretapped recordings of former president Nicolas Sarkozy talking with his lawyer could be used as evidence in an ongoing corruption probe, one of his lawyers said.

Sarkozy, now head of the opposition UMP, is accused of conspiring with his lawyer to give a magistrate a lucrative job in exchange for inside information on another corruption probe related to campaign financing.

The ruling is an blow to Sarkozy, who returned to frontline politics last year ahead of an expected run for the presidency in 2017.

The 59-year-old — deeply unpopular at the time of his election defeat to Francois Hollande in 2012 — is working hard to change the image of his party after bitter leadership tussles and financial scandals.

He and other party leaders are hoping to change the name of the right-wing UMP to “The Republicans”, which members will vote on at the end of the month.

While his much-heralded comeback has been dogged by legal woes, his party gave the ruling Socialists a drubbing in local elections last month.

Investigators first bugged his phones over allegations that he accepted illicit payments from L’Oreal heiress Liliane Bettencourt for his 2007 presidential campaign, much of it in cash-filled envelopes.

He was cleared in 2013 of taking advantage of the elderly woman while she was too frail to understand what she was doing.

But during the investigation, fresh allegations surfaced that he had discussed the possibility of giving a magistrate from a top appeals court, Gilbert Azibert, a juicy job in Monaco in return for information on the Bettencourt case.

“I am giving him a step up,” Sarkozy is heard saying in a recording from February 2014, referring to Azibert.

A few days later, his lawyer asks him to “put a word in for Gilbert” and Sarkozy agrees, only to backtrack suddenly a few days later.

Sarkozy was charged in July with corruption, influence peddling and violation of legal secrecy over the case — and became the first former head of state to be taken into custody for questioning.

Azibert never got the posting in Monaco but has also been charged along with Sarkozy’s lawyer Thierry Herzog.

The former president’s legal team has attempted to suppress the recordings, saying they were a breach of lawyer-client privacy rules.

The court of appeal ruled otherwise on Thursday, arguing that privacy rules did not apply if recordings revealed a potential crime.

“Contrary to our legitimate hopes, the court has not upheld our calls for dismissal (of these recordings),” said Paul-Albert Iweins, one of Sarkozy’s lawyers.

Sarkozy, who has denied doing anything wrong, is expected to challenge the ruling in a higher court.

He faces a theoretical maximum of 10 years in prison if found guilty, but legal experts say a custodial sentence is unlikely even in the event of a conviction.

Among the multiple investigations in which he is mentioned are charges that his campaign team falsified invoices to get round spending limits during his 2012 presidential campaign.