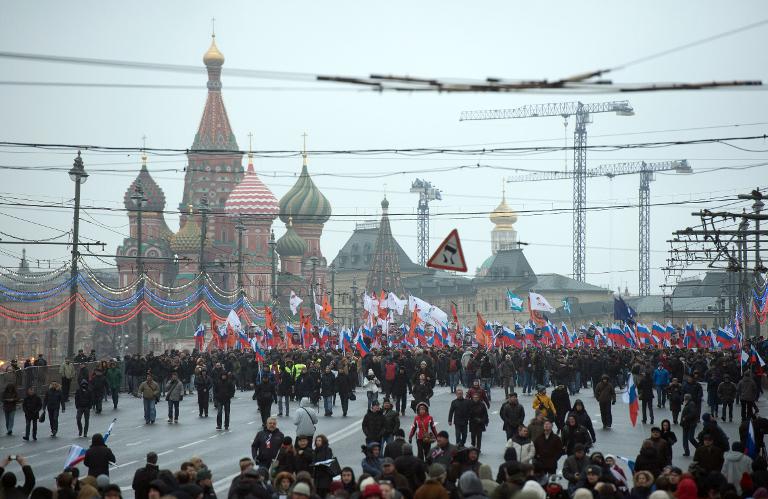 The slogans on the placards ranged from the innocuous to the obscure but the response from the Russian authorities was swift and harsh.

After several thousand marched last week through the Siberian city of Novosibirsk holding signs that included “Stop taking offence” the event organiser Artyom Loskutov was quickly jailed for 10 days and branded a “prisoner of conscience” by Amnesty International.

Loskutov, a performance artist who likes to poke fun at what he sees as the Russian authorities’ heavy-handed approach to dissent, stages his parody protest each year.

But his failure to obtain permission landed him in jail.

The clampdown on the demonstration is seen by observers as the latest example of what they call a concerted official campaign to stamp out any voices that might be seen as questioning the Kremlin’s tight grip.

It’s in this atmosphere that many opposition activists and liberal-minded Russians are choosing to vote with their feet and leave their homeland rather than stay and risk prison or worse.

Russia’s tiny opposition is still reeling from the brazen assassination of one of the country’s leading Kremlin critics, Boris Nemtsov, who was gunned down within sight of the Kremlin in late February.

Now some of the most vocal activists have packed up their bags in fear not only for themselves but for their families.

Yevgenia Chirikova — who mounted a high-profile campaign against the construction of a highway through a forest near Moscow in 2011 — said she had left Russia for Estonia last month fearing she may lose custody of her children in an intensifying crackdown.

She followed in the footsteps of many others including prominent liberal-minded journalist Galina Timchenko, music critic Artemy Troitsky and Ivan Ninenko, former deputy head of Transparency International in Russia.

“These and many other amazing people left the country over these past years, as the environment has grown increasingly more suffocating and hostile,” wrote Tanya Lokshina, Russia programme director at Human Rights Watch.

“This exodus is a loss for Russia. These people were in fact Russia’s future, the future stolen from the Russian society by the powers that be.”

Despite Putin’s pledges to solve the murder of Nemtsov, pressure on opposition activists has been relentless.

On April 16 — while President Vladimir Putin declared during a televised call-in that “the opposition has the right and opportunity to participate in the country’s political life” — armed police searched the offices of exiled Putin critic Mikhail Khodorkovsky’s rights group, Open Russia, and confiscated its computers.

The next day police knocked on the door of Natalia Pelevina, an activist with the RPR-Parnas opposition party that Nemtsov co-chaired.

“Recently, they have begun targeting not only prominent opposition politicians but also ordinary activists,” said Pelevina.

“They want to terrorise us, to force us to give up,” Pelevina told AFP. “Well, I am scared but I will never ever give up.”

After the search at her apartment, Pelevina was declared a suspect in the so called “Bolotnaya case” that owes its name to a Moscow square, scene of mass protests on the eve of Putin’s inauguration to a third term in May 2012.

She risks being jailed for up to 16 years.

Pelevina’s fellow political activist Narmina Akhmedly said that she was torn by her thoughts of leaving Russia and her desire to do good.

“How can I help my country if I am not there?” she said.

“But it became so hard, so terrifying to be in politics. We are so tiny in the face of the government machine. We must unite to have a chance to succeed,” the student said.

Those who have chosen to stay are trying to do just that.

Last month the opposition led by the 38-year-old anti-corruption crusader Alexey Navalny announced plans to form a democratic alliance and contest next year’s parliamentary polls as well as several local elections this fall.

“Our number one task is to achieve political representation for people of democratic convictions who have not had their own party in the State Duma for the past 13 years,” Navalny wrote on his blog.

Many are hugely sceptical, pointing to persistent divisions within the opposition and the Kremlin’s apparent readiness to tighten the screws even further.

Konstantin Kalachev, head of the Political Expert Group, a think tank, estimated that up to 20 percent could potentially vote for an opposition candidate.

“That’s enough to make it into the State Duma,” he said, noting that the local elections will be a major test for the newly-formed democratic alliance.

But Julius von Freytag-Loringhoven, a Russia watcher at the Friedrich Naumann Foundation for Freedom, said that more opposition activists risk going into exile or face repression if they openly challenge Putin.

“The future of the opposition does not depend on it, but on the Kremlin,” he said.