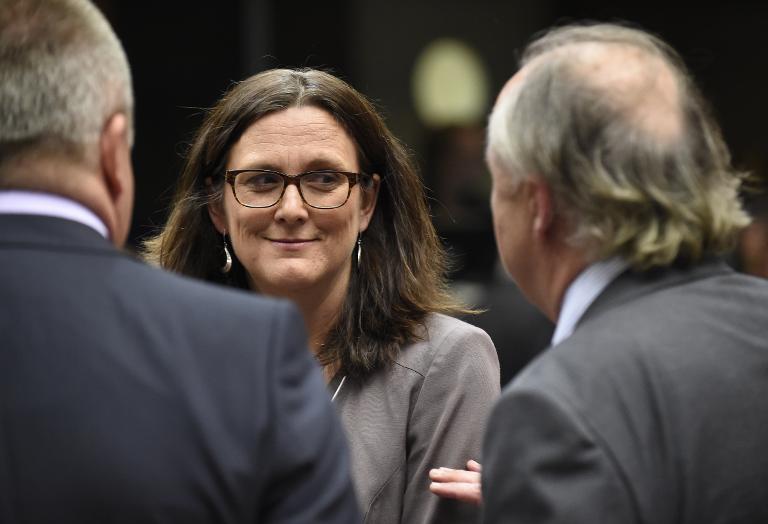 The EU said Thursday it would not bow to Russian demands to delay further the planned January 2016 implementation of a free trade deal with Ukraine which is bitterly opposed by Moscow.

“The date is the first of January next year,” EU Trade Commissioner Cecilia Malmstroem said.

“It is not for Russia to decide,” Malmstroem said, adding that the 28-nation European Union has been very clear on the issue.

The free trade accord is part of the broader 2014 EU Association Agreement at the heart of the Ukraine crisis and was originally due to come into effect in January this year.

In September, however, the EU postponed implementation for a year to support peace efforts as a first Ukraine ceasefire accord was negotiated.

In return, Russia promised to hold off on the retaliation it had threatened if the EU and Ukraine had gone ahead with the trade pact without resolving its concerns.

Russia claims that what is known as the EU-Ukraine Deep and Comprehensive Free Trade Agreement will damage its own important economic ties and interests in its Soviet-era satellite.

Several rounds of talks between EU, Ukraine and Russian officials have been held but no progress has been reported.

“We are willing to talk on practical difficulties with the Russians, we will do so, there will be a ministerial meeting later this month to find practical solutions,” Malmstroem aid.

She announced later Thursday the three parties would meet on May 18 at ministerial level in Brussels.

Russia’s ambassador to the EU Vladimir Chizhov said earlier this week that Moscow’s request for another DCFTA delay was “not met with great enthusiasm” although its concerns “have been taken on board.”

An EU diplomat said that at talks last month Russia had asked for a delay to 2017 and had threatened retaliation against Ukrainian goods if it was not agreed.

Moscow had been told that was out of the question but at the same time, “we do not want to break the contact with the Russians,” the diplomat said.

The EU is also involved in separate, equally difficult talks with Kiev and Moscow on ensuring Russian gas supplies to Ukraine, and onward to Europe, are secured for the coming winter.