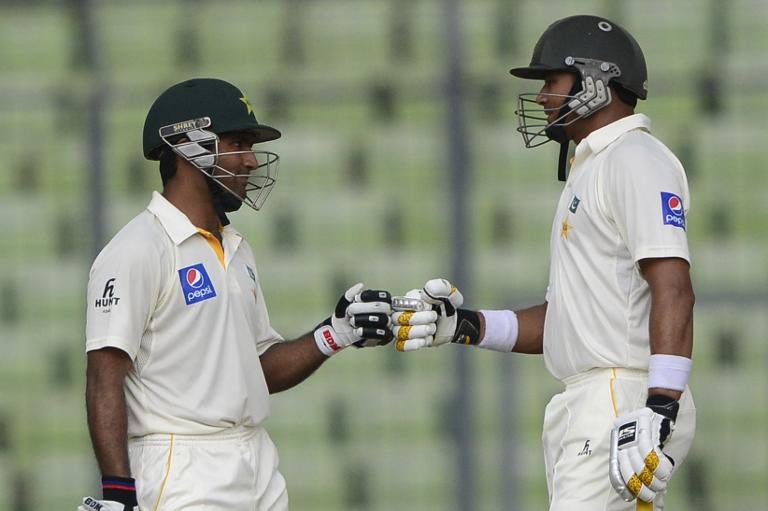 Azhar Ali smashed a career-best 226 and Asad Shafiq made 107 before the bowlers rattled Bangladesh’s top order to leave Pakistan on top in the second and final Test in Dhaka on Thursday.

The pair put on 207 for the fifth wicket as Pakistan posted 557 for eight before declaring their first innings during the tea interval at the Sher-e-Bangla stadium.

Bangladesh tottered to 107 for five in reply by stumps, still 450 runs behind and facing the daunting prospect of batting for a major part of the remaining three days to avoid defeat.

Left-arm seamer Junaid Khan set the hosts back by trapping Tamim Iqbal, who hit a double-century in the drawn first Test in Khulna, leg-before with the fourth delivery of the innings.

Junaid also had Mominul Haque caught behind by Sarfraz Ahmed for 13 and leg-spinner Yasir Shah bowled Imrul Kayes for 32 to reduce Bangladesh to 69-3.

Wahab Riaz had Mohammad Mahmudullah fending a catch to short-leg and skipper Mushfiqur Rahim was bowled by Yasir off the last ball of the day. Shakib Al Hasan was unbeaten on 14.

Pakistan lost skipper Misbah-ul Haq in the day’s second over, bowled by Shakib for nine, before a run had been added to the overnight score of 323 for three.

But Azhar and Shafiq denied Bangladesh another success till just before the tea break when four wickets fell in the space of 27 runs as Pakistan slipped from 530-4 to 557-8.

The 30-year-old Azhar, who had been rescued by a no-ball early on the first day after being caught in the slips off seamer Mohammad Shahid, hit 20 boundaries and two sixes.

Having twice fallen for 157 in his 41-Test career, Azhar moved past that score by edging off-spinner Shuvagata Hom for a boundary.

He brought up his 200 by lofting Shakib for a six, while Shafiq quietly moved to his sixth Test century with a single off left-arm spinner Taijul Islam.

Speaking to reporters later, Azhar chose to focus on the team’s performance rather than his own milestone.

“The best thing is that we performed well as a batting unit and applied ourselves,” he said. “Our target was to get a big score, but picking up five wickets was really the icing on the cake.

“The wicket played easy on the first day, but today it began to take turn and the bounce was also awkward.”

Bangladesh’s Imrul said the hosts were capable of fighting back despite being pushed on the backfoot.

“Anything can happen in cricket,” he said. “Our first target is obviously to avoid the follow-on and see how far we can go. If two or three batsmen get runs, the momentum can change quickly.”

Bangladesh were hampered by a depleted attack, with seamer Shahadat Hossain sidelined with a knee injury after bowling just two balls in the match’s first over on Wednesday.

Of the nine bowlers used by the hosts — skipper Rahim and Tamim Iqbal were the only ones who did not turn their arms over — Shahid was the most impressive with figures of two for 72 in 31 overs.

Taijul was hammered for 179 runs for his three wickets and left-arm spinner Shakib went for 1-136 runs in 30 overs.

Pakistan are seeking their first win at the end of the month-long tour, after they were routed 3-0 in the one-day series and also lost a Twenty20 international for the first time against Bangladesh.